Hockey does not have “bringing my talents to South Beach” free agent bonanzas. Yes, there are teams that win championships as a result of being heavily stocked with talent and depth that rolls them to a Stanley Cup, but often those teams are built as a result of deftly scouted drafts with the occasional smart free agent signing sprinkled in here or there. Look no further than the 2009 Penguins or the 2010 Blackhawks for evidence. While free agency is a large part of hockey, the tendency, often, is for teams to lock up their prized young assets early on, or at least attempt to do so, with a massive contract that gets them paid, but keeps them in the fold through their formative years. Many stars stay with the same organization for the vast majority of their careers and few championship teams are built almost exclusively on big-name free agents. The closest team in recent memory that might fill that description is 2002 Detroit Red Wings, an astonishingly old team which had four Hall-of-Famers (Steve Yzerman, Igor Larianov, Brett Hull and Luc Robitaille), six more players that are certain to be inducted at some point (Pavel Datsyuk, Sergei Fedorov, Brendan Shanahan, Nicklas Lidstrom, Chris Chelios and Dominik Hasek), two more that just might join them (Darren McCarty and Tomas Holmstrom) and two players that had already scored overtime Cup-clinchers for other teams in the previous six years (Hull and Uwe Krupp).

They were an immortal squad built on the backs of veteran acquisition and free agency in a way that is a dramatic outlier from how the NHL, generally speaking, has done business. Even that team, however, was no situation of LeBron James and Chris Bosh signing contracts as the top two free agents with the same team. Seeing the top two names on the market go to the same place is rare. Seeing them go to a small market is rarer still. And yet, on July 4, 2012, while most of us in the U.S. were prepping for our barbecues or traveling to to someone else’s, the Minnesota Wild, they of the one division title in their history, three playoff appearances all time and none since George W. Bush was still in the White House, managed to sign Zach Parise and Ryan Suter to identical 13-year $98-million contracts that will carry them both from the age of 27 to their post-retirement fishing days near the Superior Hiking Trail.

The Minnesota Wild are not a good team. Despite a surprising first half before a tumbling second in 2011-12, they are an unbalanced mixed of unfulfilled promise (Dany Heatley), inconsistent offense (Devin Setoguchi) and a whole lot of youth. And yet, somehow, some way, they took the two prizes of free agency in this offseason, Suter, the top defenseman on the market, and Parise, the top forward available and given his combination of youth, leadership, offensive production and defensive dedication arguably the most desired free agent in the history of the NHL. While the idea of the Wild attempting to lure Suter and Parise to Minnesota as a package deal had been floated for months due to the fact that both are friends, Parise is a Minnesota native and Suter is from neighboring Wisconsin, the notion had been met by most hockey insiders and fans alike with scoffing and amusement.

As a lifelong Devils fan, I personally felt as if of all the teams in the hunt for Parise, Minnesota was probably the least likely destination. Rumors that the Rangers, Penguins, Flyers, Blackhawks and Red Wings would all be hot on his trail seemed a far more likely result to anyone paying attention, and despite the rampant assumption that Parise would simply go to the highest bidder like any free agent might, the New Jersey Devils, the team which had drafted him, groomed him for eight years and that he captained to the Stanley Cup Final this June was in the mix right to the very end. Ultimately, and Parise and Devils GM Lou Lamoriello both confirmed it, the top free agent on the market wasn’t interested in getting $120 million from the major powers of the NHL like Pittsburgh, Detroit or Chicago. The money would be there wherever he went. This was about playing in front of his biological family in Minnesota or his professional family in New Jersey.

This will wind up being a colossal shift both for the Wild and the Devils. Make no mistake. For Minnesota, this is like adding David Wright and Matt Cain on the same day, while for New Jersey, this is the equivalent of losing David Wright, Mike Piazza, Tom Brady, Tim Duncan or Derek Jeter in his prime. With no disrespect to Suter, who is a fine player in his own right — though I’m inclined to believe he isn’t quite as fine a player as some others do — Parise was the prize of this class and maybe the last decade. Prior to this offseason, the biggest free agent departure in Devils history was when Scott Niedermayer signed a contract with the Anaheim Ducks in 2005 to join his brother Rob, something the Devils tried to preempt by attempting to acquire Rob Niedermayer via trade and offering Scott Niedermayer, whose number was retired by the Devils this season, more money than Anaheim had. In the end, Niedermayer opted to play with his brother in southern California, where they won a Cup together in 2007. Niedermayer had been a Devil for more than a decade at that point, earning three All-Star Game appearances, a Norris Trophy and three Stanley Cups over that span. In the wake of the 2004-05 season lost to the lockout and the resulting offensive changes to the game, a slick-skating, puck-moving defenseman was the most sought after item in the new NHL and Niedermayer was the best one around.

When he left New Jersey still had Martin Brodeur, Patrik Elias and a recently drafted forward out of North Dakota named Zach Parise, but any Devils fan can easily tell you that that moment was a crossroads for the franchise from which it almost appeared it had yet to recover until the team’s dream run to the Stanley Cup Final this spring. Parise’s move home is of that ilk. It is a similarly transcendental moment for the franchise that was made for personal and not monetary reasons and might well undo years of gradual improvement. It is in no uncertain terms a devastating move that might set the Devils back significantly, and for any Devils fan that is watching this happen the first two thoughts that have entered their minds are reminders of the Niedermayer departure and just how damaging this could be to the remarkable progress the team made this season. That Parise had made it clear throughout the past year that he was genuinely hoping to work out a long term deal to stay in New Jersey, and that it seems as though it was legitimately extremely difficult for him to leave the team only makes it that much more painful for those of us who watched him develop and own his jersey.

Or in my case, own two of them. 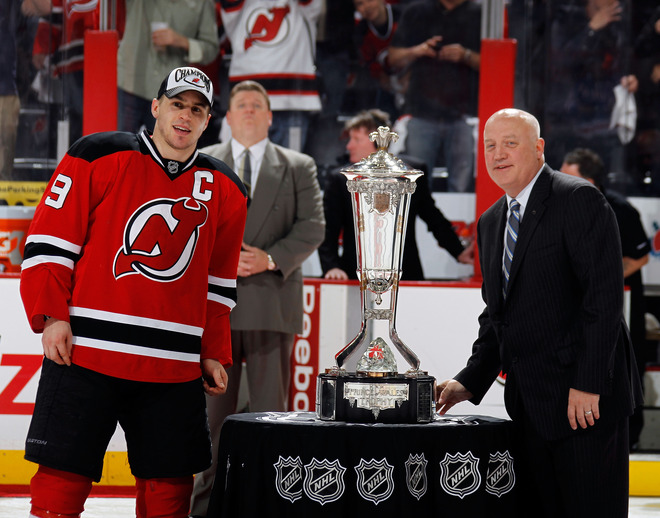 Parise was an icon for the Devils who was perfectly situated to take over for Martin Brodeur as the face of the franchise once Brodeur hung up his skates, something that will likely happen at the end of a two-year contract he signed this past weekend to stay with the team until he is nearly 42 years old. He was adored by the fans and happy as a part of the franchise. As New Jersey’s captain gathering his entire team to take a picture with the Prince of Wales Trophy after winning the Eastern Conference Finals this season despite abiding by the superstition not to touch the actual ornament, it seemed at that moment that the future for Parise and the Devils intertwined was without limit. As a result, seeing him leave for another city looks and feels for Devils fans like a breakup with your true love that both partners know didn’t have to happen.

Of course that it did is really no one’s fault. One could argue that New Jersey should have ponied up the dough to sign him to a long term deal a year ago when he was a restricted free agent in arbitration and the team could have inked him for a decade rather than the one-year $6 million contract he wound up with, but there were reasons not to do so on both sides. On October 30, 2010 in Los Angeles, Parise tore the meniscus in his right knee, taking him out for almost the entire rest of the season. He played one more game in April, but the Devils, headed for their first non-playoff season in 15 years, opted to rest him rather than risk bringing him back too soon for no reason. As a result of that injury, the Devils were understandably wary of committing $100 million to a player whose health was something of a question mark.

That doomed-before-it-starts explanation absolves both sides of any guilt, but it does not make it easier for anyone. July 4, 2012 is almost certain to stay up there as one of the two worst days in the New Jersey Devils’ history for the fact that its chosen leader and likely franchise cornerstone is gone before he could even begin to achieve his massive potential. Yesterday Devils fans felt like they had lost the Stanley Cup all over again, but losses in a Final happen and you move on. In this case, New Jerseyans will have to see Parise in a different shade of red for the next 13 years, a constant reminder of what could have been even if there is no ill will — and there shouldn’t be. The pain instead comes from knowing that when Parise is one day inducted into the Hockey Hall of Fame, people will remember him with a Wild jersey instead of a Devils’ one.

There is also the temptation to drum up hatred in the hockey world because of Parise and Suter’s decision to put their powers together much like LeBron, Bosh and Dwayne Wade while the hockey media stood breathless outside their offices reporting on every nook, cranny and nonexistent development for either. This, however, was a free agent courting of a different sort. There was no showy tour of NHL front offices, no televised spectacle. This was a decision done quietly and deliberately and without any ego-stroking sturm und drang. Both Parise and Suter have been very public about how agonizingly difficult it was for them to decide to leave the only teams they had known.

But in the end, they made the decisions they made in spite of their low-key nature not because of cameras, gltiz or glam, but because they just wanted to go home and play in front of their families. That doesn’t make the day less devastating or painful, nor does it make the Wild’s shocking coup any less remarkable and organization-changing for them. But perhaps we brokenhearted fans who wear the horns and tail can take a small bit of solace in that for both of these players the decision on where to take their talents was less about fun, glitz and glam and more about coming back to the playgrounds of their youth. After all, despite the name of their new team, the parties aren’t quite as wild on the south beach of Lake Minnetonka.