I’m not surprised that the sporting world is having an argument over who should start the MLB All-Star game for the National League. Every year can’t have an automatic answer like a dominant Roy Halladay or a war horse-like half season from Justin Verlander. I’m not even surprised that Matt Cain is a part of the conversation, considering his video game statistics and the accompanying hype provided by the perfect game he threw just weeks ago.

What I am surprised about is that the opposing part of the argument for NL All-Star starter is…R.A. Dickey.

Unbelievably, just three years after finishing the season with Minnesota with a 5.21 ERA and walking nearly as many batters as he struck out, R.A. Dickey is favored by many, including our own Pucklius, as the presumptive National League All-Star Starter.

However, he’s not without his detractors. An e-mail debate began to stir today with the assertion that yes, the Mets ace was more deserving of throwing the NL’s first pitch than Cain.

At first thought, this is simply ludicrous. How could Dickey be more qualified than the guy who threw a perfect game? Let’s look at the tale of the tape:

Matt Cain: 15 starts (11 QS, 2 CG), 9-2, 107 Ks, 74 Hits, 22 Walks, 2.27 ERA, 0.90 WHIP
Well, that wasn’ helpful. Their statistics are stunningly similar in nearly every way, except for the obvious win-loss record (which is itself a pretty superfluous statistic). Both have their pros and cons, and with each of them having approximately three starts left until July 17th, there’s a lot left to be decided. So let’s turn to the experts.
But obviously they were busy, so we here at MAMBINO HQ decided to tackle the issue. I’ll be taking the side of Cain, which shakes my Dodger Blue bones to their marrow, and Pucklius will be trumpeting his very own Dickey from Queens. Let’s see if either of us can swing each other.
KOBEsh: The numbers between the two really aren’t helping to create any separation between these two guys. Out of all the arguments, which are you looking at as the strongest in Dickey’s favor? 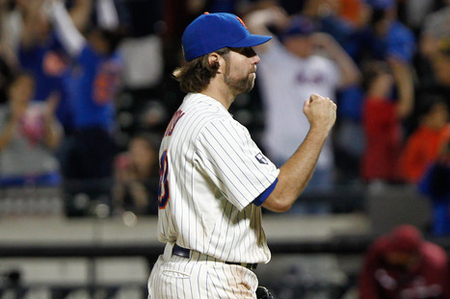 Pucklius: You’re right in that it’s hard to go wrong, but I think you’ve got to look at his quality starts and complete games in addition to the sheer dominance he displayed over the six or so starts prior to Sunday’s game against the Yankees. The rest of the stat line between the two is almost completely identical, but Dickey leads both in quality starts and complete games, which perhaps more than anything might be a sign of consistently putting your team in position to win games. Granted, the differences in those categories are slight — perhaps even negligible — but I do think those combined with his ERA and WHIP are crucial. Cain’s numbers are also stellar, but the flukiness of a perfect game — and yes, while they are tremendous accomplishments they are flukes — dramatically impacts his ERA and WHIP on the whole. Take those nine perfect innings out of the equation and suddenly Cain is posting an ERA of 2.48 and a WHIP of 0.98. Those numbers are still absolutely stellar, but the difference between Dickey and Cain would be clear.

That said, the argument of “If Cain didn’t throw a perfect game” is really as valid as “If the Yankees didn’t win 27 World Series”. It can’t be discounted, but it does help to misrepresent in some small manner just how close they’ve been. Both Dickey and Cain have been brilliant, but I think when the entire body of work is compared, Dickey is a hair in front in the race. 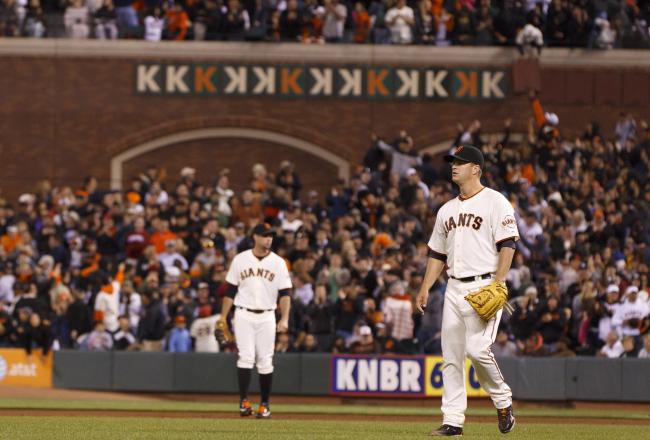 KOBEsh: Good points, all. However, I think your disregard of a perfect game goes a bit too far. The fact is that the guy threw a no hitter and didn’t walk a single person. Is that more or less fluky than having two one-hitters in a row? Would your argument change if he threw a one-hitter with no walks? I understand that a perfect is indeed so rare that it’s a fluke occurrence, but I think to dismiss it as anything less than a tremendous showing of potential and skill is a mistake. Taking out the historical relevance of the feat, you’ve GOT to focus on the fact that a guy faced 27 batters and no one touched a base. Have to.

It hurts me so bad to argue for Matt Cain. So, so freaking bad. I hate the Giants with all of my wee lil’ Japanese heart. Thinking about a San Francisco victory parade makes me dry heave late into the night. But my argument is that all things considered equal, we really do have to go to intangibles. Just to prove further that things are even, here are a few off-beat statistics that are even more startling:

There are some incremental differences of course, but all in all, it’s pretty even. Average game score, SO/BB ratio, pitches per inning and BABIP are pretty much equal. The categories where either man has an advantage (WAR and ERA+ for Dickey, with run support average and defense-independent pitching for Cain) offset each other. It’s really hard to say that one guy has had a more dominant season than the other.

However, in my mind, Cain’s intangible differences come from two places:

1) A perfect game that again, despite it’s flukish historical probability, was one of the most dominant games ever thrown. Unlike a lot of other perfect games (Philip Humber, Dallas Braden, Dennis Martinez, Don Larsen), Cain’s was a bi-product not just of a weak opposing offense or just a really good day; he’s been this good all season long. I think this punctuates his ability, rather than demeans it by saying that it’s just a one-time freak occurrence. Yes, other lesser pitchers have performed to far less acclaim for their careers, but I think that when you look at Cain’s body of work, this isn’t just “luck” of one really good day.

2) Cain has a lot more pressure on him to perform. He’s on a team that was supposed to either win the NL West, or come damn close to it. The Giants STILL can’t hit, so Cain knows that he’s got to be aces every single night. I’m not saying that the Mets offense behind Dickey is much better, but the fact is that I don’t think R.A. has faced any of the same type of pressure that Cain has seen all year long.

Pucklius: Don Larson and Dallas Braden’s perfect games came against weak offenses? Larson’s perfect-o was twirled in the World Series. Braden did his against a Rays team that eventually made the postseason and had the best record in baseball at the time. Whom you throw your perfect game against can be just as random as the event itself.

KOBEsh: I’m not saying that those did in particular. I’m saying that (if I’m getting you right) the “randomness” of a perfect game can’t be discounted just because it’s historically rare or that baseball footnote nobodies have pitched them, as well as some of the greats of the game.

Pucklius: Throwing a perfect game shouldn’t be discounted, but when you look at something that takes a pitcher’s entire resume into account — or should — you can’t weight it too heavily either. Otherwise why not give the Cy Young to anyone who throws one.

KOBEsh: Can’t you say the same thing if we’re bringing in two one-hitters in a row? Isn’t that just as rare as a perfect game?

Pucklius: Well, really my argument is that Dickey’s entire resume is very slightly more impressive because Cain’s one start significantly impacts his averaged statistics. Dickey’s one-hitters are less fluky than the perfect game because it represents sustained dominance over two starts rather than one brilliant night (to say nothing of the 40-plus innings he threw without an earned run until Sunday), but in both cases one or two starts is too small of a sample size to really extrapolate either way.

You’ve heard both sides. Thoughts everyone? Who starts the All-Star Game for the National League?

3 Responses to "Who Starts the All-Star Game for the National League? Dickey or Cain?"