Nobody pays any attention to the NHL until the playoffs. There are a whole lot of sports that Americans find more enjoyable…until the playoffs roll around and hockey FORCES you to pay attention. This year’s playoffs are no exception and many across the country are finding out about a secret that some Los Angelenos have known for years; there is a hockey team in LA named the Kings.

Hockey is sort of a big deal in my family (translation: my grandparents are from Canada). My grandfather used to have season tickets to the Kings when they first came to Los Angeles in the Forum. Ultimately, he moved on to being a more American-American and spent his hard earned cash on season tickets with the Dodgers. But this Canadian blood inside me has left me with a passion for the game and the expertise to explain to you, the somewhat playoff hockey fan, who the hell these Kings are, why they are playing out of their mind, and why I think they are going to play for Lord Stanley’s Cup in a few short weeks.

How we got here:

For the last 3 seasons the Kings have languished in the very competitive Pacific Division of the Western Conference. As a result of a long term rebuilding program instituted by General Manager Dean Lombardi, the team is stocked with home-grown draft talent. Heavily investing in tough minded defensemen, Lombardi has assembled a team that runs on a defense-first philosophy. The former coach of the Kings, Terry Murray, fired mid-season this year, fit perfectly into the defensive model set forth by the GM (he was a defensemen during his time as a player in the NHL). Though never a strong scoring team, LA found itself qualifying for the playoffs 2 out of 3 years under Murray by their grit and a handful of timely goals. Having a great base of quality young players that included the likes of Drew Doughty, Anze Kopitar, Jack Johnson, Wayne Simmonds, Jonathan Quick, and Dustin Brown, The Kings were ready to make a run out of the basement of the West.

Then came 2012. This was finally the season that AEG (Kings owners) would allow Lombardi a little leeway with spending money outside of the draft and bringing free agents that can score onto the squad.

Lombardi tried everything to bring a true scorer to the team. He signed Mike Richards to a long term deal, traded for Dustin Penner, and brought Jeff Carter over this season at the trading deadline to try and spark an offensive outburst. He also fired Coach Murray and replaced him with veteran Stanley Cup-winning coach Daryl Sutter. The cards of the deck were set and yet the Kings still couldn’t score consistently. 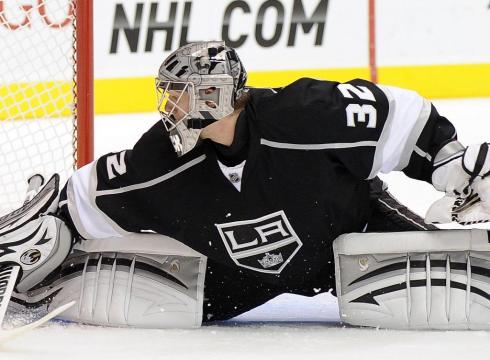 Fortunately, the low scoring boys of LA had the best goaltender in the league on their side. Jonathan Quick had more shutouts in 2012 than any other keeper in the NHL and oftentimes found himself winning games that saw little if any offense being provided by his forwards or defensemen. Having Quick behind the goal gave the Kings a chance to make it to the playoffs given a bit of luck and some timely scoring.

Who we thought they were:

Having top line scorers in Carter, Kopitar, and Richards, the Kings should have coasted to a Pacific Division title. We thought the combination of the young core and the newly acquired former all-stars should have pushed them over the top.

Instead, they spurted and stopped in great heaves of offensive production. There appeared to be something missing from the formula and it came in the form of leadership. Dustin Penner is known as a hot head (he had back-spams this season from eating pancakes), Jeff Carter was a renowned drinker during his days with Philadelphia, and Mike Richards left his captainship with those same Flyers via trade to join the Kings under the stead of Captain Dustin Brown.

Brown failed to bring the leadership that the Kings needed to unite all these disparate parts. So much so that the Kings were rumored to have been shopping him around at the trading deadline. The rumors, and having Sutter at the helm, provided the spark that Brown needed. To close out the season in a contentious playofff qualifying fight, Brown was relentless as a leader. He called out the youngsters in private and yet shielded them from blame for any scoring woes in public. He brought Carter and Richards back together and reminded Penner that though at one point he was a superstar in the league, he should now relish the role of a third-line winger along the young Kings prospects.

Suddenly the formula worked. The defensemen continued to work in tandem with the best goalie in the league, and the first line of Brown-Kopitar-Williams worked as a powerful one-two punch when followed by the rekindled chemistry of King-Richards-Carter.

Why the rest of the league should be scared:

Dustin Brown threw down the gauntlet Sunday night against Vancouver. The Kings, who had played an inspired first two games in Vancouver, started out listless and got away from their powerful forecheck attack that served so successful in Games 1 and 2. The Canucks took advantage and put plenty of shots on goal against Quick. The Kings looked to be heading towards another shift in momentum/first round playoff exit (yes, I always assume the worst with these boys) until Brown seized the moment and put the rest of the league on notice.

The captain utterly destroyed the Canucks best player, Henrik Sedin, in a legal and decimating hit in front of the Canucks bench. Staples Center erupted, the Vancouver bench protested, and the Kings were alive. Anyone with a pulse and a whale on their jersey sought out Brown for some retribution.
Sedin struggled to breathe as he grasped for the bench and I was sure we would never see him on a rink again. Brown’s hit assured the rest of the NHL that the Kings are the real deal. They will not back down from any team, even the President’s Cup-winning boys from Vancouver. The youngsters on the Kings squad now have the confidence that their captain has their back while Jonathan Quick has their behind covered.

Doughty picked up on that sentiment after the game, saying, “It was definitely a big hit by Brownie. That was one of the better hits I’ve seen in a long time. To do it on a star player, their best player, is just an even keyer part. It definitely gave us some momentum, to show that our leadership was showing the way to go. We’ve all just got to follow that.”

I could go on and on about how much I like this Kings team. I could tell you how the third line of this team gets me so pumped up that I have woken up my housemates cheering on Penner-Stoll-Lewis while they outplay the Canucks with their physicality. I could extoll the power of Kyle Clifford and the balls of Brad Richardson (who just lost an appendix and is skating to prepare for Wednesday’s game) or the youthfulness that Willie Mitchell (34 years old) has shown while chasing down the third and fourth line of the speedy Canucks. I could go on and on about how the Kings have never gone up 3-0 in a playoff series in their history, that they haven’t gotten close enough to the Stanley Cup to even smell it over the years, or that Kings fans bring a tenacity and passion to them not associated with the typical LA fan (see my piece on the typical Lakers experience). But instead, I will leave the final word to Jared Stoll.

When asked his thoughts about a possible sweep of the best regular season team in the NHL and the tone set by his captain, Stoll said, “he was huge. He scores the goal. He’s hitting everything that moves. It’s playoff hockey from our leader.”

It’s playoff hockey. The rest of the league is on notice because the Kings finally are who we thought they were.