(This Washington Wizards preview is from frequent MAMBINO advisor, but lamentably infrequent contributor AO. This manliest of men grew up a true hoophead, unfortunately stricken with a love for his local District basketball organization. I always pull for the Wiz, just so this long-suffered, but extremely dedicated fan can hold his curled head up high) 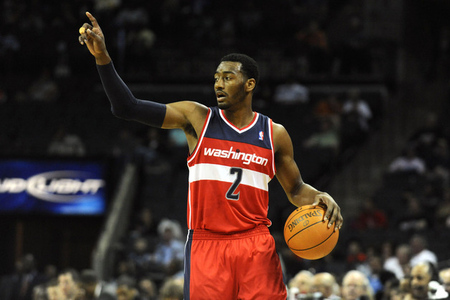 You know when you move into a new place and the landlord tells you the rugs have just been steam cleaned?  Yeah, you know that smell.  Well, that same, crisp, brand new smell is emanating from the Verizon Center in the nation’s capital, the home of YOUR…Washington Wizards.

This season is all about new beginnings, which is kinda funny because this is the t-shirt I was handed at last year’s home opener.  New traditions, eh?  Not so much.  Last year was thoroughly influenced by some of the hold overs from the Agent Zero era – the very same that left a despicable mark of pranks, immaturity and a “I’m young, rich and creative, so let’s get online and show the world how creative I am!!” attitude.  Three characters from the aforementioned Gilbert era were still around midway through last year.  Now, going into a brand new 2012-13 NBA season, they’re all gone.  In a last minute deadline deal, GM Ernie Grunfeld stealthily got rid of Javale McGee and Nick Young, and in return got a solid veteran in Nene, his arthritic knees be damned.  Then, this off-season the last domino fell: Andray Blatche was amnestied. With him gone, the page could finally be turned. I could not be happier to say: that attitude has officially left the building. The incomprehensible stupidity finally can be put behind us, and the team can focus on an important question: how to win basketball games.

It’s really nice to be able to talk about the Wizards in an on the court context.  Going into the 2012-13 campaign, while minimal, there are some expectations around the league for the Wizards to make a jump.  When you’re an annual bottom dweller, this may not be hard, but some are even talking playoffs. The main reason is the aforementioned purging coupled with the veterans Grunfeld brought in not only to teach the youngsters but push them to compete. While writers around the NBA blogosphere mostly criticized the Ariza/Okafor additions for clogging cap space over the next two years, I saw it as a bold move that said “we are ready to start winning ball games”.  We’re no longer throwing out a team that has built-in excuses.  Youth is not an excuse when you start 3 veterans in your front court.  Okafor, Ariza and Nene should anchor a front court to go along with what many perceive to be the teams future–its young but potentially dynamic backcourt.

You all know about John Wall.  And yes, he deserves his own paragraph, so I’ll oblige.  The Pope is entering his third year in the league and coming off a decent year but one where he didn’t make any progress from his rookie year:

You read that right: his numbers were exactly the same.  I don’t blame him much, mostly because of the environment he was in.  He was stuck in a washer in the middle of a cold spin cycle.  Grunfeld and company were never thinking about winning games last year, but rather were in the final stage of a complete overhaul of the Wiz roster: Coach fired a few games into the season, team gutted at the deadline, and on and on it went. So I don’t blame Wall.  But the time is now. The breakout many predicted last year, I feel is coming this year.  I don’t foresee a massive difference in the basic stats, but I do expect his TO to go down and his FG% (41% rookie year, 42% soph yr) to go up.  I’m looking at something in the neighborhood of 18/5/9, 44%, with 3 TO.  One last note on Wall: I joined the Twitterverse a couple of months ago and of course have been following him. I have to say, I am a little worried about the amount of partying he’s done this summer.  Seems like every day he or someone else is posting a picture of him clubbing with his arms draped over some groupie’s tits. One of the reasons I’ve always been so high on Wall was his character, his absolute dedication to basketball and the desire to win. I hope his fame, or the losing, hasn’t gotten to him.

Aside from the veterans and Wall, there are two more things I’ll be watching throughout the year.  One is Bradley Beal, the 3rd pick in the draft plucked to be Wall’s running mate of the future.  There’s preseason debate about if he’ll start the year on the bench or not but my thinking is this: he’s the future starting 2 of the Wizards, whether he holds that title on opening day or not is irrelevant. My guess is he’ll be starting sooner rather than later, not only because he’s already the most polished scorer on the roster, but because Jordan Crawford was put on this earth to be a sixth man. Watching Beal in summer league it became clear why he was the consensus choice. He’s a knockdown shooter, he can slash, and he’s a stand up citizen. I may be a bit caught up in the long overdue optimism rocking DC in the form of RG3 and the Nationals right now, but I think Brad Beal is a big reason why the Wizards might join the party.

The second thing I’ll be watching is the effect of a new assistant coach.  The Wizards signed longtime Spurs assistant coach Don Newman to run their defense. In this NFL-esque era, teams are hiring assistant coaches specifically to coach one side of the ball (see Thibodeau, Tom, pre-head coaching career). It’s about time the Wizards jumped aboard that train. Newman should bring a much needed workman attitude to a unit ranked 23rd in the league in defensive efficiency both of the last two years.  As the old adage says, defense isn’t about talent, it’s about effort.  Plus, the Wizards have some viable candidates to become legitimate defenders in the NBA. Wall, Singleton, and Vesely have all shown flashes of being long armed hounds on the defensive end. Add this to proven commodities like Okafor and Ariza and you may have something. We’ll see if Newman is the man to bring it all together.

Best Case Scenario: It all starts with Wall.  If he gets out of the clubs and gets back to his previously obsessive work ethic, the others will fall in line. Beal will be an instant contributor, providing long range shooting and a competent sidekick for Wall. Returning coach Randy Wittman will push the pace and let the horses loose, while Newman will turn up the defensive pressure. The team will be known for running and pressure on the defensive end. No opposition will have an easy night playing the Wizards. They’re tough attitude will keep them in the discussion for the 8 spot all season long, and at the end of the year Wall will have some Rondo esque games to push the Wizards into the playoffs. After stealing a couple of games from the Evil Empire in Miami, they gain valuable experience before going down in 6 games. And, most importantly, playing with Wall and Beal will become very appealing for future free agents.

Absolute Apocalypse: The rugs still stink. The Wizards start the year devoid of any sort of chemistry. Wall’s jumper looks hitchier than ever and he goes into a funk. Wall distances himself from his teammates and openly talks/tweets about wanting “more help”. Nene plays less than 20 games and announces that he has a rare medical condition called “fucked up knees” which will force him to retire from professional basketball. In a panic move to get more butts in the seats, Grunfeld signs Agent Zero to a 10 day contract in April.  In those 10 days Gilbert manages to mess up the franchise more than he did in his previous stint by pooping in Wall’s shoes, and being arrested at mid court as he “playfully” waves a AK47 at President Obama sitting courtside.

Expected Finish: 4th in the Southeast Division, 13th in the Eastern Conference