Allow yourself to be a child again, and remember that one of the roughest moments of the Toy Story movies is when Buzz Lightyear finally realizes that he’s only a toy. Although, similar to other toys, he incredulously falls like dead weight whenever humans enter the room, it takes Buzz a while to realize that he can breathe without his space helmet, he cannot communicate with his home base, and he cannot fly. No matter how shiny his packaging is, he is still just like Woody and the gang. Each toy falls in line relative to the whims of Andy, and regardless of how much each toy is used, they are all part of Andy’s collection.

Buzz was pretty upset when he discovered the limitations of his powers. He almost let it get to him by becoming a depressing shell of himself, but he recovered in time to make the best of his situation. He didn’t go to the Vegas summer league and renegotiate his contract to put Andy in a worse position just because things weren’t perfect on the home front. But even if he did, the rest of the inanimate figurines would still be happy to play for the one team they’ve always known.

If you consider yourself a basketball one-percenter, then you may oftentimes refer to your NBA team as part of your family and friends, using a collective pronoun that implies shared feeling and experience. In reality, we all have the mental capacity to understand that we won’t ever don an official NBA (and coming in a year, 2×2 endorsed) uniform, we don’t employ agents or publicists, and for the most part, we actually are compensated at the level of our worth. However, we are justified in using “we” and “us” because we invest so much of our time and money for the right to feel the glory of a win and the immense pain of a loss.

As fans, we are YOUR New York Knickerbockers. We may be the toys that stay buried in the bottom of the treasure chest that never get to see the light of day, but we’re still there. So through all of our owner’s faults, if Jeremy Lin decides that Daryl Morey will provide a better home for him, it is our directive to stay home, even if the grass appears greener on the other side.

The Brooklyn Nets provide the alternative option for which a less headstrong Knickerbocker fan has been dreaming. Armed with a free-spending owner and a brand new arena, the Nets have put together a roster that will surely contend in the competition-starved Eastern Conference. But is that grass a true, solid green? Every single starter on Brooklyn (Deron Williams, Joe Johnson, Gerald Wallace, Kris Humphries, and Brook Lopez) will form a tasty first 5, but all of them are overpaid, including D-Will. This has left the Nets with less money to spend on their bench. The Knicks, on the other hand, feature battle-tested veterans to provide much-needed depth; yeah they’re old and frail, but nobody will argue that Jason Kidd, Marcus Camby, and Kurt Thomas can’t contribute to a professional basketball team. Brooklyn’s plastic seal hasn’t been lifted, so the new toy on the block is always intriguing. But I don’t know if that franchise provides the “greener” alternative. Green? Maybe. Greener? Questionable. It’s not puke-green, but it certainly isn’t money-green. 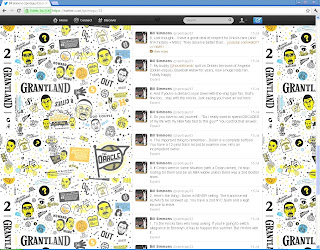 The most famous Mambinite of them all, Bill Simmons, gave his blessing for tortured Knicks fans to leave Manhattan this summer. As always, he put conditions on making a choice of free will, but I’ll take it a step further, and say that you can’t leave town. Not now, and not later. Never, with the obvious caveat being if you or someone you care about experience something similar to or worse than what Anucha Browne-Sanders experienced.

KOBEsh has asked me why it’s always “cool” to be a Knicks fan. He says that whenever someone informs him of their basketball allegiance to Manhattan, the fact that the franchise has celebrated only two title victories, and none in the past 40 years, doesn’t dissuade him from putting that fan in high regard. For some reason, being a Bocker fan will always be chic and in style. And maybe that’s because from New Jersey to Connecticut, and based in the Apple’s core of Manhattan, we are not like other fans. We swear by one place to make us the best slice of pizza, we choose one place to spread cream cheese on our Jewish doughnuts, and we live for one place to make the combination of bread-meat-cheese-vegetable-dressing greet our five senses as if it were a piece of art. From the fan who thinks John Starks’ #3 should hang in the rafters, to the fan who can’t forgive Starks’ 2-for-18, “we” will stay loyal. Loyal to a fault, a fault that is cancelled out by the strength of such loyalty. Sure, those who repeat history and expect different results are doomed to fail. And we would do anything in our power to oust Dolan from his reign as King if we could. But if we desert him, we will never be a true fan of another team. Our only true punishment would be to serve as a Man of the Night’s Watch.

It is perfectly fine to attend Knicks games by purchasing tickets only through the secondary market.  It is definitely acceptable to refrain from exchanging money for an officially-licensed product bearing the NYK logo. You are even free to consider the possibility of changing teams. But if you cross the line, things will never be the same. When the going gets good back on our side, you can gladly reclaim your seat on the bandwagon. It just won’t feel as good as if you had stayed true from Day 1.

Brooklyn? Please. My jeans don’t need to be tighter than they already are, and I don’t want to associate with a smaller ratio of MTA subway lines per square foot. Things will work out. And if they don’t?