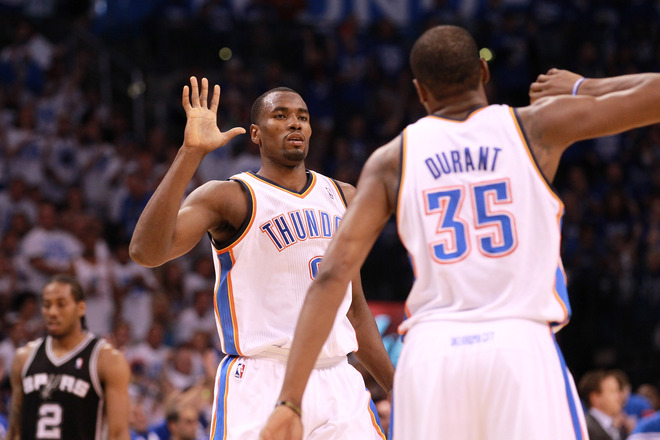 With two dramatic victories this weekend by the Boston Celtics and Oklahoma City Thunder, both the Eastern and Western Conference Finals series have essentially been reduced to 3 game series. The final four teams all held home-court serve, so it’s down to three games apiece every other day this week to decide who heads towards the championship round. For NBA fans in Miami, Boston, Oklahoma and San Antonio, the next 6 days are going to be sheer agony – none of these cities are going to be sated by a mere conference crown. They’re all title contenders whose goals start and end with an NBA championship. Win or lose, nothing’s been accomplished except for taking years off the lives of these four fan bases.

The one silver lining to BockerKnocker’s Knicks and my Lakers getting bounced weeks ago is that our hearts have been rapidly calcified in the wake of our collective playoff disappointment. No longer feel the palpitations associated with a ball clanging hard off the back iron or careless pass floating to the other team. I happily and calmly watched this weekend’s action with wavering attachment depending on whoever had the lead. The Lakers fan in me wanted the games to end up in a tie, just so that everyone would be miserable. However, the basketball fan in me felt the slightest tickle in my cold, black heart watching Rondo pick apart the Miami defense and Kevin Durant continue his ascendancy to another level of stardom.

However, we need to check-in with people that still have a pulse, feel feelings and of course, care about the game’s outcome past pathetic Lakers apologist biases. Two MAMBINO correspondents, have graciously agreed to help us out and take the temperature of these series with the score tied at 2-2.

First up, ThunderStolt on his Oklahoma City Thunder:

KOBEsh: In the first two games, San Antonio looked like an unstoppable offensive juggernaut, shooting a combined 50% from the field and averaging 110 points a game. They were on a freakin’ 20-game win streak. In so many ways, they looked completely unbelievable – getting open shots whenever they wanted, and completely effortlessly at that. The OKC defense was reduced to rubble, and the only thing that Scott Brooks could do to slow down the Spurs attack was to play the much maligned “Hack-a-Splitter’ (which, to Brooks’ credit worked). In your words, the Spurs just flat-out looked like the better team.

So what’s changed the last two games? In Game 3, it seemed like San Antonio came back to Earth a bit, only scoring 82 points, shooting 39% and not looking like the Harlem Globetrotters. However, in a Game 4 loss, they still racked up 103 points, shot 47% from three and 50% from the field. How are the Thunder winning these games? What would you say is the main component that’s changed?

Thunderstolt: The key word here is effort. the Thunder are winning games with effort.  In games three and four the Thunder have put together games chalked full of effort to a man.  Scott Brooks said it best: to beat this Spurs team, you cannot have only one effort on a single defensive possession but two, three, and even four times in a 24-second shot clock – you must account for those five guys because when you don’t, you give up a layup or wide open three.

Granted, in game four the Spurs topped 100 points and were efficient from the field. However, the Thunder were hounding them all night long and the quality of the shots the Spurs were taking were far below that of game one and two, when they were getting into the paint, rotating the ball all over the floor and shooting wide open shots. In the last two games, the Thunder have forced the Spurs out of their comfort zone, cut off the head of the snake in Tony Parker, and packed all 5 guys into the paint to stop the dribble drive penetration. Also, what has helped OKC is they started switching on the pick-n-roll after putting Thabo Sefolosha on Parker to start game three. They’re then able to use their extraordinary length to bother the Spurs defensively, and that’s showed in the amount of steals and deflections the Thunder are getting game after game in this series.
I thought Kevin Arnovitz put it best in his column from ESPN.com  after game four: “In short, the Thunder are no longer putting themselves in the position to have to make the lesser of two bad choices, which is how the Spurs generally beat you. But if you can hold down the fort for 18 seconds without getting stretched, or having your guard get taken out by a screen, or being forced to send your center to step out on penetration, then the Spurs have to find someone to create for himself. And that’s not their game.”
So defensively, we’ve accounted for the change in OKC’s defensive game – it’s been clear the past few games that they’ve found ways to adjust to what seemed like a relentless and unstoppable San Antonio attack. You’ve got to give massive props to Scott Brooks for essentially out-coaching the best in the game.
Offensively however, it looks like OKC is a new team. What do you think is the biggest difference?
On the other side of the court the Thunder have given the Spurs a taste of their own medicine.  I don’t know if playing the Spurs has actually helped OKC offensively or not, but it damn sure feels like the Thunder coaching staff put on the tape of games one and two and told their guys “Look at how many open shots they get by making the extra pass or even the extra pass to the extra pass”.

In games three and four the Thunder have shared the ball beautifully and it’s resulted in everyone getting involved and easy buckets.  After ranking last in the league in assists per game during the regular season, the Thunder have found how simple scoring is when it comes directly from sharing the ball the last two games (including a 27 (!!!) assist game in game four, 9 more than their 18.5 regular season average).  This has obviously helped get everyone involved, including the OKC front line.  According to ESPN Stats and Info: “Serge Ibaka, Kendrick Perkins, and Nick Collison combined to average just 13 points through the first 2 games of the Western Conference Finals. Over the last 2 games, those three have totaled 36.5 points per game on an eye popping 78 percent from the field.” Many of those buckets from the three bigs are coming only a few feet from the basket or wide open 17 footers.  The Spurs were going to live with OKC’s bigs taking jumpers, but after Serge Ibaka’s unbelievable performance in game four they at least have to challenge him now.
Let’s get a little more specific here and spotlight on the two engines that have made OKC go the past three years – their All-Stars Kevin Durant and Russell Westbrook. While KD has gone bonkers the past two games, Russ has put in a mere seven field goals on 25 chances. How are you interpreting their performances, and how are they still winning like this?
I feel there has to be something said for the way Russ Westbrook has evolved as a player.  He did not have good offensive games in OKC as you said, going just 7-25 combined for 17 points in games three and four.  Last year this could have (and did at times) hamper his effort in other areas.  This year, and especially this postseason, if Russ’ shot isn’t falling it doesn’t seem to faze him.  When he realizes that he doesn’t have it on a given night, he’s finally realized that he can do so many other things that help his team win. He was a pest on defense in games three and four (thanks to Brooks for putting Russ on Danny Green who is able to play off of and recover to because of his speed and athleticism) and is keeping his turnovers way down as well (four turnovers TOTAL in Lakers series with a 27 assist to 9 turnover ratio so far in this series).

Case in point: When Durant went supernova in the 4th quarter of game four, 13 of those 16 straight points involved Russ playing the screener in a wonderfully designed set by Brooks and his staff.  The Thunder found something that worked and ran it over and over again until the Spurs found a way to stop it.  More specifically, Westbrook brought the ball up the court and passed to Harden on the left side top of the key.  Russ then goes to set a pin-down screen for KD at the low right block (by the way, a VERY underated improvement for KD this postseason?  He is waiting on screens.  KD has a tendency to get anxious and play too fast, but is learning how to set him man up to maximize his screens) and then Durant comes hard off to the free throw line where Harden gets him the ball while the Spurs were swtiching everything.  This leaves KD with Westbrook’s man (who is 100% of the time shorter than him) and he can operate in open space at the elbow.  If they come to double off Westbrook, BAM, he is left wide open for a corner three.  If they don’t double KD – 16 straight points and nail dagger after dagger.
There have been times Westbrook has to carry the offensive load for the Thunder when things get bogged down but he has no issue playing second or third fiddle to KD and Harden in crunch time if need be.  As much as his mid-range jumpshot has improved, his attitude and poise have been just as impressive in the 2012 campaign.

If the Thunder can replicate the ball movement on offense and keep their defensive intensity at a high level, I give them a good chance to win the series.  They have drawn blood on these Spurs and are making them adjust to what THEY are doing instead of worrying about how to make adjustments to the Spurs.  We will see if these kids in OKC have really grown up and they can put their official stamp on this league by taking 2 of the next three.  Not an easy task – the last time the Spurs lost two in a row they rattled off 20 wins.  But both of these teams know how to beat the other, and we are in for a treat for however long this series lasts. For OKC, winning will put the league on notice that the Thunder’s time is now.