Welcome to the 997th episode of RAW. It kicked off like any self respecting RAW should, with John Cena coming down the ramp to cut an electrifying promo. The other day I realized that John Cena is responsible for some of my favorite WWE moments over the past few years. To be honest, I’m not quite sure how I feel about that. 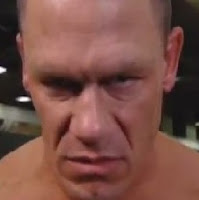 Say what you want about his wrestling ability, but he plays a hell of a foil.

Back to RAW action. Cena does his shtick for a while until Daniel Bryan minus ring entrance music interrupts. Everyone’s been trying to get their Daniel Bryan on recently, even Ohio representative “Mean” Jean Schmidt. Bryan gets meta with us and lets the audience know that he and John Cena have nothing in common, unless of course Bryan wins the title and Cena wins the Money in the Bank ladder match.

CM Punk interjects. Gets the crowd involved with all the Yes! chants.

Chris Jericho feels left out so he hit the ring. Classic Jericho ensued welcoming us all to “RAW is Jericho” as well as asking Bryan to kindly “shut the hell up.” Also, after tonight, none of the competitors will never eeeeeever be the same again apparently. That man knows how to sell a t-shirt.

Kane gets involved, followed by an…insightful Jerry Lawler comment? “Not a lot of catchphrases for this guy, but a lot of victories.” Congratulations King, that was the first time I haven’t wanted to strangle you on commentary since 1999.

“Welllll it’s the Big Show!” After Big Show’s music hits, all of the competitors in the ring start a full out brawl.

Punk, Cena, Bryan, Jericho. One of these things is not like the other.#Raw


This match was alright until it completely broke down and Titus and Young left the ring. I’m not a fan of the Prime Time players just leaving match ups. It’s a stupid gimmick that makes them look weak. These guys should be pushed as viable challengers to the Tag Team titles.


As I said, they leave and are soon followed by Cody Rhodes, leaving only Otunga in the ring to fight 4 guys.

To make the odds even worse Brodus Clay comes out and throws Otunga back in the ring. Why would that not result in a disqualification? Either way that leads to: sock puppet, killswitch, victory, grown men dancing with children.

So Sin Cara was Teddy Long’s surprise? Talk about anticlimactic. Good Lord, I hope that man never throws me a surprise party. A real surprise would have been a Rey Mysterio Jr. return, fresh off suspension.

Crowd chants “culero” at Alberto Del Rio, which is Spanish for…umm something to do with the ass that cannot be printed in this column. Google is your friend.

Del Rio assaults Sin Cara as soon as he enters the ring. I find it annoying that technically a match never took place. Sin Cara entered the ring, the bell should have rung, it should have been an official match. But just like Brodus Clay vs the Big Show in the main event of RAW a few weeks back, the bell never rings to start the match so it saves the Face wrestler a loss. It’s not like these things are recorded in the Gray’s Sports Almanac.

Quick question after watching the recap between HHH/Heyman: Why hasn’t HHH been fired? Paul Heyman isn’t under contract by the WWE. HHH assaulted a civilian in the middle of a WWE ring with absolutely zero provocation. Let’s get real!

Bait and switch by the WWE here. Pretty sure we were promised Brock Lesnar on RAW tonight. Instead Heyman let us know that Brock Lesnar would be answering HHH personally……in 3 weeks on the 1000th episode of RAW. Can’t use up all of Brock Lesnar’s guaranteed appearance dates just yet. Typical. Anyway, good stuff from Heyman as usual.

Michael Hayes joked that the 8-man was the real “mixed” tag match. Means we have another “sensitivity” meeting when we get home#RAWTonight

Dolph Ziggler and Sheamus have been spending too much time in the ring together. It wouldn’t be a problem if you would just give Ziggler a victory every now and then. Sheamus dominates the match up until Dolph tags in Vicky. AJ Lee with the Shining Wizard and victory over Vicky. I hope after her angle runs its course with Punk/Bryan, AJ gets added to the women’s division. Beth Phoenix should squash her like a bug, but there is no reason she couldn’t have credible matches with everyone else.

This week we got Slater vs Doink the Clown. I have to say, I did enjoy Michael Cole talking about the history between Doink and Jerry Lawler before the match up. It’s nice that they do not completely ignore their older fans. Slater gets the victory over Doink, which I’m a bit happy about. Jobbing to Vader and Sid is one thing, but losing to a clown would have buried him for life.

(Editor’s note: And that’s a problem because….?)


After the match Diamond Dallas Page came out. It’s a shame they used his crappy WWE music. DDP still looks like he could go in the ring. He hits a picture perfect diamond cutter on Slater before leaving.
Steve ‏@stevieray1986

Young @WWE fans across the globe are wondering why a yoga instructor just RKOed Heath Slater. #sad #RAW
Kane vs The Big Show

Teddy makes Eve wear a name tag, which only makes her look like the hottest Walmart counter girl of all time. I do have to say that Eve pulls off her pretentious glasses quite well. Enter Mickie James 2.0 and AJ Lee verbally slaughters Eve, promising us that she’ll make an impact later. And does she ever.

AJ shutting down Eve? Seriously. She’s can do no wrong. I bet AJ’s the mother in How I Met Your Mother.

Kidd wins quickly with the roll up. After the match Tensai beat up his manager in the ring. Didn’t he do this two weeks ago. Did I miss something? Why would Sakamoto return to be his manager?
It appears the Lord Tensai push is over with. It was a nice experiment, but seriously Charlie Haas got more of a crowd response than Tensai. Solid push for Tyson Kidd recently. It looks like management is seeing how the crowd reacts to Kidd getting victories. He’s a solid dark horse to win the Smackdown ladder match.
Bryan/Y2J vs Punk/Cena

CM Punk coming out before John Cena is a direct insult to the WWE championship. Daniel Bryan and Chris Jericho seem to have some great chemistry together similar to The Thrillseekers Lance Storm and Chris Jericho. I would love to see a feud happen between these two men. Great action between all of these men. This was without a doubt the very best part of RAW. Awesome top rope superplex with Punk and Bryan.
Match ends with AJ threatening to jump through a table because she wasn’t getting enough attention from neither Punk nor Bryan. After kissing Punk, she throws tosses him onto DB, with both going through the very same table.
I’m not going to lie: The AJ Lee stuff had me glued to my television. I did not have any idea what was going to happen. Honestly, I really did think that she was going to put herself through the table. I certainly did not see her putting Punk and Bryan through the table. In the words of Tommy Dreamer “She’s hardcore! She’s hardcore!”

Final Thoughts: Brandon Stroud said it the best on Twitter.

Brandon Stroud ‏@MrBrandonStroud
Raw 3 hour commercial was the best part of Raw. #raw
He’s absolutely right on both accounts. RAW sucked and the commercial was brilliant. This was done in similar fashion to the old ESPN Sportscenter commercials. However, it was nice to see the WWE champion close RAW for a change.

5. Classic Jericho – Tonight he brought out all of his Face catch phrases in Heel fashion. We even saw his heel pin cover where he puts his foot on his opponents chest and poses.
4. Diamond Dallas Page – Completely wasted in the WWE. At least they recognize that he can be an asset with the company. I’m pretty sure he did some voice work for the WWE 13 video game.
3. Tyson Kidd – Young talent. Should be one of the better parts of the Smackdown ladder match at Money in the Bank.
2. The Main Event match – All four of these guys have good chemistry with one another. Put any of them in a match together and you’re guaranteed value.
1. AJ Lee – First time we have a back to back winner in the column. Honestly though, it wasn’t that hard to grab a spot this week. Pickings were slim.
Don’t forget to follow me on Twitter @TheRawLibrarian. Enjoy your Fourth of July.