Unlike the electric first round of the NHL playoffs, the NBA’s first round probably won’t go into 16 overtime games, nor will there be the type of seismic upsets like the 8th seeded Kings beating the best team in the NHL, the Vancouver Canucks. However, amidst the much more predictable nature of the National Basketball Association are some pretty dynamic first round matchups. Other than being entertained by the extra ton of passion that the sometimes lethargic basketball professionals lack from their game, we’ll get 4 series from the Western Conference that could go 6 games or more. This compacted 66-game season created a slightly skewed final finish, with teams seeded lower than you’d think, and every series more about the matchup rather than the seeds designated to the teams. The setting for the ever-enticing upset is ripe. Welcome to the most wonderful time of the year.

BockerKnocker: There isn’t a team with more basketball IQ than the San Antonio Spurs. Coach of the Century candidate Gregg Popovich is sure to impose his will over any team, but Tim Duncan is one of the greatest big men in NBA history. He ran roughshod through the league on his superb talent, and has extended his career by understanding his body’s limitations and outsmarting his opponents season after season. The Jazz present a boatload of problems with their bruising frontline, but before people call Memphis on this shindig, Manu Ginobili will (knock on wood) be available to take advantage of Utah’s biggest weakness: their perimeter defense. San Antonio will NOT be embarrassed 2 years in a row. This series is for the NBA nerds: Popovich will attempt a blitzkrieg checkmate, the Utah frontline will try to counter by getting rough, but Utah’s coaching staff will be overmatched. 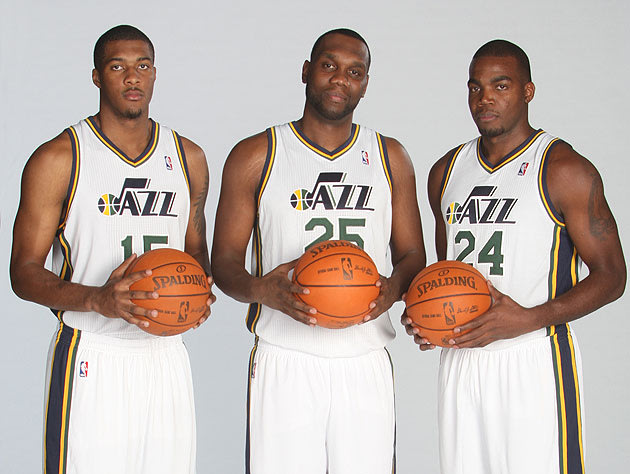 How Utah can morph into the 2011 Memphis Grizzlies and win this series: It’s a bit of a broken record at this point, but you know how the Grizz beat the Spurs in last year’s playoffs; sheer size. Zach Randolph, Marc Gasol and Darrell Arthur blitzed the Spurs inside for a convincing 8 seed vs. 1 seed matchup. However, what everyone forgets is how dynamic their guard play was. Tony Allen locked up Tony Parker and brought him down from 51% shooting during the regular season to 46% in those 6 games. Mike Conley almost outperformed Parker, averging 14/5/6. OJ Mayo shot 40% from the 3 point line!

To win, not only do Al Jefferson, Derrick Favors, Paul Millsap and Enes Kanter have to outmuslce San Antonio, but Gordon Hayward, Devin Harris and CJ Miles have to create havoc on the perimeter both defensively and offensively. Essentially, the Jazz have to play up to their capabilities, as they have the past few weeks. It’s possible.

BockerKnocker: OKC is going to have a game or two in this series where you’ll doubt their status as a championship contender, and rightfully so. Their offense is incredibly basic, especially in the fourth quarter, when head coach Scotty Brooks’ version of thinking outside of the box means setting an off-ball screen for Durant or Westbrook, instead of an on-ball screen. Dallas is full of cagey veterans and Vince Carter (not a compliment). Dirk will need a herculean performance for the Mavs to win, and with a younger, stronger Serge Ibaka shadowing him all series, it is highly unlikely that he’ll win this series for Dallas. OKC is still searching for experience, but their youth won’t slow their talent enough.

How the Mavericks could upset the Thunder: A few things would have to happen, but a big plus for the Mavs would be if James Harden isn’t playing up to his stellar 2012 season standards. But everything hinges on how well the Mavs can guard the interior and limit the Thunder from destroying them from 15 feet and out. I’d expect to see the Mavs play a lot of zone, which  really predicates on Brenda(n) Haywood and Ian Mahinmi being able to hold down the paint. At that point, Shawn Marion would have to continue his great defensive season and at least try to slow down Durant. Offensively, Dirk has to continue to ride this wave of hot play he’s displayed the past few weeks and force Ibaka or Perkins to move out of the paint and into the perimeter. It’s a lot to ask, but if Harden isn’t at full strength and the Mavs defense can force the Thunder to go cold offensively, they have a shot. KOBEsh: To quote a great, great man, “Too big, too strong, too good”. The combination of Chris Anderson, Timofey Mozgov, Kosta Koufous and unintentional comedian JaVale McGee have a lot of size and strength they can throw at Andrew Bynum and Pau Gasol, but it really won’t be enough for those 3 of those guys that have so little experience playing major playoff minutes. The running attack led by Ty Lawson (I’m expecting him to average 20/5/12 in the next week) will put a lot of pressure on what has been a rather poor Lakers defense as of late, but I think this is a case of the Lakers just being much more talented than the Denver Nuggets. I can’t see this going more than 5 games with the Lakers ending it at home.

How the Nuggets can stretch it to 6 (BockerKnocker): The Nuggets win a cheapie in Colorado because Kobe…umm…well…meets a girl there…

(Editor’s note: How dare you)


BockerKnocker: Memphis is stacked from head to toe. They have versatile guards who can handle the ball, shoot from the perimeter, and body up opposing wings. They have bigs with deft shooting touches, energy to box out for months, and an unselfishness rarely seen in basketball players over 6’8″. And don’t forget the missing piece from their playoff run last year, Rudy Gay, who has blossomed into an extremely difficult cover. The Clippers have Chris Paul, and that’s about it. You don’t have to ask MAMBINO’S The CDP just how unlikeable Blake Griffin is, because in the postseason, the referees won’t drop to their knees and blow…the game…just because Griffin asks them to. Flop City won’t get the benefit of the quick whistle in the playoffs, especially without home-court advantage. When CP3 was traded from NOLA, many NBA lifers rejoiced that the world’s best floor general was finally going to a contender; it’s funny that now, we still feel bad for the fact that he’s once again leading a team full of misfit toys. Better luck next year Chris, you’re going home early.

It’s more or less a given that CP3 will have a dynamic playoffs, which is more than needed without home court advantage. But other than Paul, the Clippers need to play that dynamic front court defense that everyone thought they could be capable of this year. DeAndre Jordan, Kenyon Martin and Reggie Evans need to mow down and box out a Grizzlies big man corp who are extremely mobile, shoot it from just about anywhere and despite missing Z-Bo for half the year, were 5th in offensive rebounds. Both teams have their deficiencies from beyond the arc, but strong guard play and good ball movement. If the Clippers can win the battle on the boards and Chris Paul can continue to swallow 4th quarters like a crappy New York apartment washing machine, then the Clips can win this series.

One Response to "MAMBINO’s Western Conference Round 1 Playoff Predictions"