After 45 long years, your Los Angeles Kings are champions of the National Hockey League.

Last night’s 6-1 victory was certainly an appropriate coronation for a team that has been playing amazing hockey since March 1st.

Not much explanation is needed to understand how the Kings got here at this point (strong defense + new coach + unbelievable goaltending + Dustin Brown = title), but I would like to take this moment to go over the  numbers the Kings have accrued on this championship run.

BY THE NUMBERS
102 – Games played by the Kings (not including the pre-season)
16 – Amount of wins it takes to be a champion in the NHL playoffs
4 – Total losses for the Kings over the last 2 months of playoff hockey
6 – Total losses for the Kings SINCE MARCH 1st
4 – Amount of series the Kings began with 3-0 leads
1 – Teams in NHL history to beat the #1, 2, and 3 seeds to advance to the Stanley Cup Finals
26 – Age of Conn Smythe Trophy winner Jonathan Quick
3 – Total American born players to win the Conn Smythe Trophy, including Quick
20 – Points scored by Anze Kopitar/ Dustin Brown throughout the playoffs
8 – Goals for Dustin Brown (two of which came in Game 6)
3 – Shutouts for Jonathan Quick
.946 – Save percentage for Quick
45 – Years it took for Los Angeles to bring Lord Stanley home
18 – Games watched on my couch with Little Que-Ese bringing strong juju (16-2 record)
Every time I watch hockey I am reminded why I love it. It is a sport that values the team over the individual in all aspects, as it is the only major sport that has a tradition of TEAMS shaking hands AFTER a series. Every player lines up after spending weeks trying to obliterate each other to say “good game” and give a pat on the back. After the NBA Finals, SuperBowl, or World Series, the first move by each team is not to seek out their competition and congratulate them on a great year. And yet there I am watching Jonathan Quick hug it out with Marty Brodeur after the game.
Devils fans can point to the referees as the cause for their demise in Game 6 (with reason, the call on Bernier was circumspect after the no call on Stoll) but I think they were screwed from the drop of the puck. Dustin “Oh Captain My Captain” Brown decided he was going to show up last night, regardless of what game plan the Devils scripted. So much of the Kings success has been spurred by Brown’s leadership. He was all over the ice last night, scoring two goals and leading the charge on defense.
Last night’s coronation was a celebration of the team that drove this improbable run. Jeff Carter, who struggled much of the season to find his stroke, had two goals. Jarret Stoll (an unrestricted free-agent this summer) won face-off after face-off. Rob Scuderi bled all over the ice and refused to miss any time. The boys just weren’t letting the Cup leave Los Angeles again. 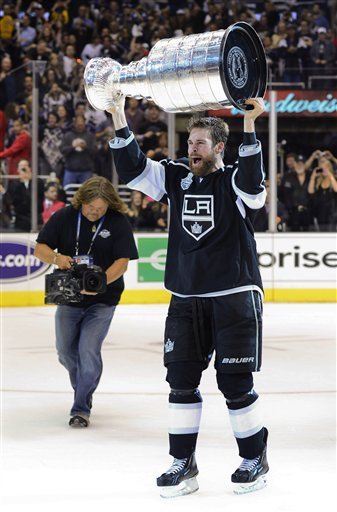 Much will be made of this team and the young core that has driven them to the championship. The folks on television seem to think this is a team to be reckoned with for years to come because of their skill and youth and I couldn’t help but agree with the talking heads. However, I believe this team is going to be solid for years to come for a very different reason: they are a TEAM.
Immediately upon being handed the Cup, “Oh Captain My Captain” found the oldest man on the roster, Willie Mitchell. The defenseman, age 35, was not the fastest man on the roster, nor was he a vaunted home grown prospect. Instead, he was the steady hand that helped guide the youngsters to the Promised Land. He was the bearded voice of reason who allowed new arrivals this season to settle into their roles.
Hockey is a game that may not be loved by all in Los Angeles but the attitude of this squad was so captivating that even KOBEishgawa, a man who doesn’t understand icing or offsides, started watching. Friends from back in LA texted for predictions, advice, explanations of rules, and everyone got on board what was a welcoming bandwagon.
The celebrations and the parade on Thursday will certainly keep the Kings in the spotlight for a little bit longer in Los Angeles but Sutter’s boys couldn’t care less. They won this trophy outright as a unit, and when the Lakers and Clippers come back into focus next fall, the Kings will still be around, ready to fore-check and scrap their way back into our hearts.
GO KINGS GO.