Prospect lists aren’t foreign to sports. Year after year, we pull apart mock drafts and rookie seasons, trying to dessiminate information, plow through the psyches of these young men and discover who exactly will be the next great superstar. Sometimes our prognostications are right on target, but for every LeBron james we have, there’s will be a Dontrelle Willis or a Peyton Hillis.

So why can’t we apply our insatiable appetite to unearth the next great one in professional wrestling? Much like basketball, football or hockey, there are tiers of performer, from the rookie scrub trying to earn his place in the hierarchy of the talent ladder, to the forgotten prospect who’s future still shines bright under the dimming lights of skepticism. Yes, wrestling isn’t the pure competitive athletic enterprise that MLB represents, but there is an element of competition within Vince McMahon’s glorified traveling circus, in which these men have to constantly improve their craft and sharpen their focus in order to be considered a luminary.

The Raw Librarian and I scanned through the WWE roster to do just that. We’ve highlighted a few grapplers that we think have the testicular fortitude to make a Hardy-esque jump up the ladder, crashing through the glass ceiling into the land where only giants – both literal and figurative – tend to leave their massive footprints. Each guy will have his own various set of skills, which he can either use for cult-like immortality, or to fade into the din of oblivion. Some of these fellows have temporarily crashed the top of the card, while others are being clearly groomed for it. However, the criteria here is simply that each guy isn’t considered by the WWE as perennial main event material.

Which of these guys could you imagine main eventing Wrestlemania? Let’s get after it.

The Raw Librarian: Out of all the names on this list, I have the most confidence in Cody Rhodes being the future of World Wrestling Entertainment. I don’t think it will be this year at WM 29 in New Jersey, but I can definitely see Cody Rhodes involved in a WrestleMania main event in the very near future.. He has the look, talent, mic skills (he turned the “Big Show” into a verb) and he has wrestling in his blood. After all, it never hurts to have people in the higher ups with your best interest in mind; his father The “American Dream” Dusty Rhodes is currently a backstage booker for the WWE and he definitely has Vince McMahon’s ear. The Rhodes family name doesn’t carry the same weight as the name “Hart”, but Cody is going to get more opportunities than someone like Drew McIntyre or Heath Slater.

KOBEsh: Completely agree, good sir. Cody has everything that you’d want in a main eventer; he’s a great mat technician, is completely willing to bump around the ring for an opponent and has that unique ability to simply look like a guy you desperately want to hate. Body-wise, Rhodes has put on a massive amount of weight in the past few years, turning from a stringy son of a wrestler, into a adequately sized middleweight. Rhodes has enough size where he doesn’t necessarily look like he’s going to overpower an opponent, but isn’t small enough where the story will constantly be how he’s an underdog looking for a fluke victory, a la Rey Mysterio or even Daniel Bryan. He’s a complete mimic of Randy Orton in every way possible; but seeing how much the Viper has accomplished in WWE over the past few years, it’s certainly not a bad thing.

Verdict: 99% chance he main events a WM in the next 5 years.

TRL: Right now David Otunga should never main event an episode of Smackdown, let alone Wrestlemania. His wrestling character? Brilliant. They don’t need to change a thing. Not only is he smarter than you, but he can beat your ass as well. 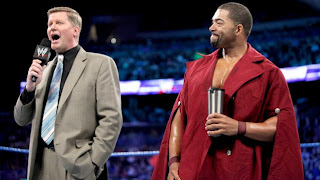 His work in the ring; visually displeasing. He needs to be sent down to FCW or the WCW Power Plant for more seasoning. You can see that he is improving in the ring, but there is no way he should be wrestling on live television right now. Keep him on TV as the legal liaison to the next GM, but make him wrestle three times at all the house shows.

KOBEsh: I actually think you’re being really kind with that assessment. Even for wrestling standards, I feel like Otunga’s promos are extremely hackneyed and stale. His reactions are as textbooks as the props he has in front of him; I can tell you the exact moment he’ll throw in a sarcastic smirk or starting a sentence with “Hey, listen [wrestler X]”. You’re right in that he needs more work on the farm for his wrestling ability; the guy is more stiff than Buff Bagwell (too soon?). But I think that his character lacks complexity and the conviction of being an alternate ass-kicker to his studious out-or-ring persona.


Verdict: 3% chance he main events a WM in the next 5 years.

TRL: This former World Heavyweight champion held the title for about 10 minutes (in comparison, Kane’s one day title reign seems like an eternity; by the way, do not watch that clip unless you want to lament for the next hour about Jim Ross no longer announcing). Much like Cody Rhodes, barring injury, I see Dolph Ziggler as the future of “this business.”The next few weeks are going to be huge in Ziggler’s progression. He’s been thrust into the main event spot due to the influx of injuries and suspensions. He didn’t win the title at June’s No Way Out PPV, but the former Spirit Squad member had a strong match with Sheamus and has thus far shown he can hang with the big boys. I am not in the minority in my beliefs, as Jim Ross, Joey Styles, Mick Foley, and Paul Heyman all have come out in support of Ziggler. These aren’t just former announcers everyone; these are four of the most intelligent and influential wrestling minds in the business.

Jim Ross@JRsBBQ
If I said I could see @HEELZiggler in a WM29 main event would you think I’m crazy? #matteroftime skeptics
Joey Styles ‏@JoeyStyles

Congratulations to @HeelZiggler, the new #1 Contender for Sheamus’ WHC this Sunday at #NoWayOut! Dolph Ziggler is money! #ShowOff #NewChamp

I couldn’t agree more! RT: @RealMickFoley Another excellent match involving @HeelZiggler . I think I detect some type of trend here@WWE

KOBEsh: Hard to disagree with those four guys. So I won’t.

I see pieces of the following wrestlers all within Ziggler’s game: Shawn Michaels, Curt Hennig, Randy Savage, Rick Rude and Eddie Guerrero. Not a bad batch of guys to be compared to. Dolph truly has it all; the look, the confidence, the in-ring goods and most importantly, a sense of charisma he can convey to the audience. Over the past few years, he’s proven he can go blow for blow with the best technicians in the company, as well as throw himself around the ring next to much bigger and less mobile opponents. Ziggler is more than capable on the microphone, playing the smarmy heel that you love to hate, but just plainly being in matches you love to watch. There’s truly nothing that will hold him back from a Hall of Fame career, except for himself. Go get it son.
Verdict: 99.9% he main events a WM in the next 5 years.

TRL: Do not mistake Kofi’s brief appearances in Elimination Chamber championship matches as an indication that he is viewed like a main eventer. He’s a high-flying, spot machine and without a doubt the most athletic competitor on either roster. But I am afraid the Intercontinental championship is his ceiling.

Quite frankly, the WWE doesn’t give the title to small wrestlers. I know what the counter argument is; Rey Mysterio Jr., CM Punk, Daniel Bryan. Rey Mysterio Jr. is a once in a lifetime athlete who will never be duplicated. He was so over with the crowd, the WWE ignored that he barely weighed enough to qualify as a Cruiserweight. CM Punk and Daniel Bryan (who both tower over Rey by about 7 or 8 inches) are two of the best WRESTLERS on the planet right now. Both of them can adapt to any style of opponent and have a 5 star match. I liked Air Boom, as well as Kofi’s work in Money in the Bank and Elimination Chamber matches, but he will never main event a PPV, let alone the Grand Daddy of them all.
KOBEsh: I love Boston College’s finest just as much as the next guy, but I have to agree; I can’t see Kofi rising much past the IC belt. It’s not that he’s not talented. As the Raw Librarian touched on, Kofi annually is the star of the Money in the Bank Ladder Match, or some sort of cage-themed bout. Other than that, Kofi is lacking two very specific qualities:

1) Stone Cold Steve Austin, one of the greatest wrestlers ever to live, once said that in order to really succeed in the business, you can’t just have the athleticism or the character to stand out. You have to look like you could actually kick a guy’s ass. Kofi’s moveset truly doesn’t convey that to me. Yes, the flips and somersaults are highlight reel moves that will catch the eyes of the younger fans and invigorate live crowds. But the downside is that leg drops and backflips won’t build you up as a effectively as throwing a simple punch or kick that will enrapture an audience. For all the gimmicks that the Rock had, Dwayne Johnson had the size and intensity that made you think “I wouldn’t want to see that guy in a dark alley”. Kofi Kingston’s offensive repertoire looks, for lack of a better word, fancy. Fancy doesn’t sell tickets, and it certainly won’t fill the stadium for a Wrestlemania.
2) Is Kofi from West Ghana, Africa, where he’s announced from? Or is he Jamaican, like his entrance music and ring name suggests? Or is he just a man from Massachusetts, as his accent dictates? Is Kofi just a guy going out there to have fun and compete, or does he want to win?
It’s been five years and I have no idea who Kofi Kingston is. It’s not entirely his fault, seeing as the WWE creative team writes his material and character direction, but part of it is up to the man to dictate who he’s going to be on television. I don’t know yet.

Much like John Morrison and Shelton Benjamin before him, I see Kofi as the extremely athletic guy who doesn’t quite have enough fire to connect with the entire crowd emotionally, not just the kids who are buying the multi-colored merchandise. He does have a bucket more charisma than Shelton or Morrison, but considering those guys were in the Sahara of personality, it’s not saying much.

Verdict: 15% chance he main events a WM in the next 5 years.