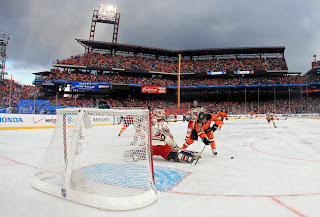 So glad you did. See in hockey a defensive player is allowed to hand pass the puck forward if he is in his own zone, but he is not under any circumstances allowed to cover the puck up intentionally with his hands. And if any player other than a goalie does that in his team’s crease, well that results in a penalty shot, the single most dramatic moment in hockey. And what’s the most dramatic way to have the single most dramatic moment in hockey? Probably a potential game-tying penalty shot in the final 30 seconds of the NHL’s biggest regular season event. Unfortunately for the Rangers, with 19.6 seconds left and the Flye… Read more...

pucklius January 4, 2012 HBO 24/7, Henrik Lundqvist, Jaromir Jagr, Mike Rupp, New York Rangers, NHL, Philadelphia Flyers, Pucklius, Winter Classic Permalink
The closest I came to writing about hockey was a post about the kid who netted a shot from center ice, only to have his prize money taken away from him. The NHL requires some actual knowledge about hockey, and maybe about too, two things I don’t particularly care for. Therefore, enjoy this guest post from my buddy Pucklius (He has a nickname that we all know and love him by, but if I were to repeat it here, I wouldn’t be breathing tomorrow morning). It’s a preview of tonight’s 24/7 – Road to the Winter Classic on HBO. HBO does some fine work with this stuff — Hard Knocks and the 24/7 Boxing series are as good as it gets. Personally, I wouldn’t have cared to check this out tonight, but now I feel morally obliged. A small victory for the NHL in its never-ending pursuit to attract more fans.
Oh, and the guy went a little overboard with the youtube links, but some of them are actually pretty epic.
Hey kids. For those of you who have been coming to The Great Mambino to see what Dwight Howard’s choice of sandwich today says about where is going to ship him, I have some mild disappointment for you. That’s probably going to be the last basketball reference I make today because one of the administrators of this fine site has approached me to whip up something about hockey.
See, I like hockey. It’s cool.
And I’m not even talking about literally, which, if you’ve ever covered a morning skate in an empty arena, you know is definitely true. No, I’m talking about the kind of cool where you see totally bonkers forehand/backhand diving scores in the rookie game, indescribable on-ice blunders, or maybe some dazzling passing by some Swedish twins. It’s that kind of stuff that makes it the coolest game on Earth after all.
As a result of this fandom, I watch hockey. A lot of it. Like, way more than the daily recommended amount. I’m not sure I’d expect all of you to watch as much as I do, least of all the progenitors of this blog, you should know that it’s not too late to get yourself in the game, and tonight HBO just might be providing your gateway drug. That’s because tonight will be their second annual forage into hockey with its premiere of to the Winter Classic.
For those of you who don’t remember, HBO did this series for the first time last year, when the League was poised to pit its two biggest stars, Sidney Crosby and Alex Ovechkin, against one another. While most of the spotlight was initially intended to be on them, the two who really made the biggest impact were cerebral Penguins head coach Dan Bylsma and the then-head coach of the Capitals Bruce Boudreau, who recently endured the shortest unemployment in NHL history. Even if Boudreau wins seven Stanley Cups in a row in his new gig, however, he will almost certainly be remembered most for his tendency to, as Lewis Black might put it, use “fuck” less as a word than a comma. This, it should be noted, did not sit well with his mother.
But what makes this show amazing isn’t just the amusing swears or close up camera work. Last season it gave fans a keen insight into the people who make the game, from how players, even superstars, talk on the ice, to the way the refs handle and encourage a fight, to penalties for losing shootouts in practice, to rookie pranks, to Boudreau’s anxiety about getting his wife a Christmas present, and perhaps most remarkably, into the refs’ locker room during their postgame beer.
The access granted and the view int
… Read more...
BockerKnocker December 14, 2011 HBO 24/7, NHL, Pucklius, Winter Classic Permalink