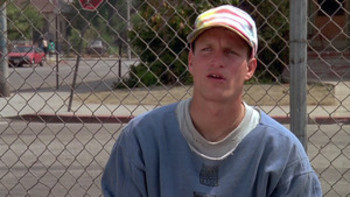 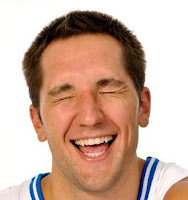 (For an updated version, WITH a starting five, check out our new White American NBA Player Power Rankings here)

There are a lot of really good white players in the NBA. Obviously there is a far larger depth of really good black players, which maybe even enhances the appearance of how talented their fairer skinned co-workers are. Regardless, no one could possibly debate that Dirk Nowitzki, Steve Nash, Manu Ginobili, Pau Gasol, Luis Scola and Andrew Bogut are amongst the very best the NBA has to offer. But what do all these guys have in common besides a lack of melatonin and an undoubted common love of The Wire? They’re all foreigners. I am counting Canada as a foreign country. They’re savages up there, you know.

A couple weeks ago, I was in attendance as YOUR…Los Angeles Lakers played the Utah Jazz in Staples Center. With MAMBINO correspondent Alvy to my right, we had engaged in our usual repartee of egregious over-reaction, merciless player heckling and general bile-filled negativity. It was glorious. In the middle of our conversation, we looked at the court and noticed that the Lakers’ on-floor squad was Steve Blakers at point, Jason Kapono at the other guard, Metta World Peace and Josh McRoberts at the forward spots and Pau Gasol holding down center. We laughed at the prospect of the 2011 Los Angeles Lakers looking more like the 1955 Minneapolis Lakers squad. It wasn’t that the team had a mostly white line-up on the floor; it was that most of them were American.

The most skilled white players in the league are either European or South American (Argentine, to be specific). End of discussion. For whatever reason, since the 1980’s America hasn’t been able to produce Caucasian ballers that are anything more than role-players or fringe All-Stars. The last wave of prolific white American NBA-ers came almost 30 years ago, when Kevin McHale, John Stockton and Larry Bird all played on the level of the best black players in the league.

So as always with Alvy, the Lakers thrust us into yet another sports minutiae discussion. This time, it was one of our favorite all-time questions: who currently are the top 5 best white AMERICAN players in the league?

In the past few years, the list was a pretty easy call – Brad Miller was always towards the top, or close to it, with Troy Murphy somewhere trailing. Raef LaFrentz, Keith van Horn and “White Chocolate” Jason Williams were perennial considerations for this prestigious top-5 list that absolutely no one took any value in.

However, the old generation has been overturned and a new set of set of rhythmically challenged pasty ballers have been crowned. Congratulations gentlemen, and welcome to the top 5.

With a bullet. Not even a question at this point. Love has done something that no white American player has done since Larry Legend – be one of the best 10 to 15 players in the league. In 6 games in this young season, Love is averaging 25.7 ppg, 15 rpg, while shooting 48% from the floor, 77% from the stripe and a staggering 42% from behind the line. Even more amazing beyond the fact that a big man can so astutely shoot the three-ball from 30 feet out and still manages to lead the league in offensive rebounding (one of the most amazing stats I’ve ever heard of), is that he’s done this for a second year in a row after losing nearly 20 pounds. Love is probably the most unique player even in a league with LeBron, Dirk and Dwight. Him topping the White American NBA Player Power Rankings is a mere formality.