Welcome to part 2 of “The Top 50 Finishing Moves in WWE History.” You can find part 1 with my analysis of numbers 50-25 located here.. We pick up this column at number 24 on the list and it’s one of my personal favorites. The man representing this finisher has spent time in Mexico, Germany, Japan, ECW, WCW and the WWE. Here to Save Us All is the Ayotolla of Rock and Rolla. He is “Lionheart” Chris Jericho. 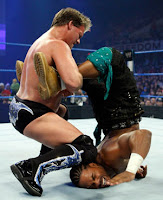 “Basically what Chris Jericho does when he puts you in that move is he bends your body in a way that is never supposed to bend.” – Kofi Kingston


This submission move is probably my favorite of all time.

I’m not sure if a difference between the two finisher names was ever clarified or not. For me personally, I always considered the move to be “the Liontamer” when Jericho intensified the pressure by putting his knee on the back of his opponent, whereas “the Walls of Jericho” was more of a straight Boston Crab applied to bigger wrestlers. Again, that is just how I personally distinguished the two. The only knock I really have about this move, is that you absolutely need your opponents cooperation to apply it. Seriously, try putting this move on a person that doesn’t want it. It’s not going to happen…believe me, I’ve tried.

“He was his own greatest cheerleader, he made the build up to that move, part of the move.” – Mick Foley

I like Edge a lot so I am going to try and be kind here. The Spear, at least Edge’s version, is no where near as good as the Rhyno’s Gore! Gore! Gore! (imagine Paul Heyman screaming in Jim Ross’ ear at the top of his lungs).

The only Spear by Edge that deserves recognition is the one he performed on Jeff Hardy at Wrestlemania 17. I still remember watching that TLC Triple Threat Tag-team championship match with my mouth open the entire time. It’s a miracle that no one was seriously hurt or dead after that match. Other than Edge’s spear to Hardy off the ladder, Goldberg’s spear was far superior. I don’t want to take anything away from Edge. He had a phenomenal career. I just happen to think that his spear is vastly overrated.

“Iron Sheik’s Camel Clutch probably holds the distinction of being one of the most brutal yet simple holds that I’ve ever seen.” – CM Punk

I never had the pleasure of watching the WWE’s favorite racial caricature perform in the ring. The good news is, the Iron Sheik has a Twitter account that is just fantastic. Seriously, follow him on Twitter @the_ironsheik. Every tweet comes off like a drunken rant. As for the move itself….eh. I’ve seen better. It’s a cool transitional move. I would like it if it was meant to weaken the neck in anticipation of a stronger submission. I don’t think this move should have made the list. If it had to be included, it would be better placed in the 40’s.

Now that you are all in hig… Read more...

It’s been a while since I’ve written anything, so needless to say, I’ve been getting the itch. I’m still far too busy finishing up my last semester of grad school to write consistent RAW reviews, but hopefully this will suffice for the time being. A couple things upfront, I will only be reviewing disc one. Discs two and three are filled with old matches from the likes of Sergeant Slaughter, Bob Backlund and the Wolfpac. I skimmed through that content, even finding an RVD vs Too Cold Scorpio match that I’ve never seen before (and really was not worth watching), but this review will primarily be focused on the 50 best finishers discussed on disc one.

One more thing, I will be listing the finishers in reverse order here and briefly discussing what merits their placement on the list. If you want to be surprised at what is included, stop reading now.

Spoiler Alert: John Cena’s “Attitude Adjustment” makes an appearance. Thankfully this glorified fireman’s carry was not in the top 10. Here we go.

50. JBL’s “Clothesline from Hell”
A strong start. In my opinion, this may be the most devastating maneuver on the entire list. There’s ways to prepare for a top rope splash or a submission move, but there is no avoiding getting absolutely destroyed by the “Clothesline from Hell.” Listed at number 50, this may be the one finishing move on the entire list that I would least want to take. I mean, it would be an honor to get Stone Cold stunned and sell it like The Rock. Taking Hulk Hogan’s immortal leg drop would be a crowning achievement in my life. However, I would never in a million years volunteer to take JBL’s Clothesline from Hell. Bradshaw already had a reputation for being stiff in the ring, and this finisher did nothing to dissuade that way of thinking. JBL took a routine clothesline every wrestler performed and turned it into one of the most fearsome moves in wrestling history.
49. Vader “Vader Bomb”
“The Vader Bomb was a pretty unique move because it showed the athleticism of a 400 lb guy” -Jim Ross 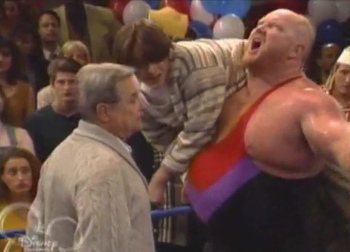 I could not agree with JR more. Even though he’s only dropping from the 2nd rope, it’s 400 lbs directly on your chest. I would imagine breathing properly after that one would be a challenge. Unfortunately for me, Vader was at the very beginning of my wrestling watching career. I recognize him more as Frankie’s dad on “Boy Meets World” than as the agile big man for the WWF and WCW. I loved seeing him come out and destroy Heath Slater during his last appearance on television.

As big and tough as Vader was, my money is on Mr. Feeny. His Vader Bomb was a cool move, made even more impressive by Vader’s size.

48. Dusty Rhodes “Bionic Elbow”
Dusty Rhodes is well before my time. The only time I’ve seen the American Dream on screen was well after his in-ring days were over. My only real memory of Dusty was during his brief time in ECW when he feuded with Steve Corino. Rhodes had that ravenous audience’s respect, so I knew he must have been a big deal back in his day. He certainly did not look like the prototypical wrestler, with his physique definitely left something to be desired. As for the finisher itself, not my favorite, but it certainly deserves a place on the top 50. It could look good if sold correctly, and it may have inspired Wade Barrett’s new elbow finish. Properly placed near the bottom of the list.
47. Million Dollar Man “The Mill
… Read more...
The Raw Librarian October 12, 2012 Bret Hart, Brock Lesnar, CM Punk, Dusty Rhodes, HBK, HHH, Hulk Hogan, John Cena, Kurt Angle, RVD, Stone Cold Steve Austin, The Raw Librarian, The Rock, Top 50 Finishers, WWE Permalink