The MLB winter meetings have adjourned, and even though OF Josh Hamilton and SP Zack Greinke–the two best free agents on the market–still remain unsigned, several key players made themselves some solid scratch joining new teams.
Of course, we had our usual mixed bags of bone-head deals and virtuoso acquisitions. Some new contracts screamed “Fiction!”, while other ones roared “Fact”. That being said, let’s take a look at the best and worst signings–MAMBINO certified–of the MLB Winter Meetings.
FACT
Seattle Mariners get:  OF Jason Bay
Jason Bay gets: 1 year, $1 million (plus $2 million in incentives), another chance at relevancy
It’s no secret; Jason Bay could very well be finished as an everyday baseball player. After a monster year and a half in Boston where he hit 47 home runs with 46 additional extra-base hits and a 7th place MVP finish in 2009, Bay signed a 4-year, $66 million dollar contract with the pre-Mayan Disaster Mets. In the next three seasons, the Canadian outfielder had only 26 jakks and 47 extra-base hits, missing almost 200 games due to various injuries. The Mets, hurting for offensive talent in the worst way, thought they’d gain more by simply buying Bay out of his last contract year, and allowing younger, albeit more inexperienced and lower ceiling players to get reps instead. Essentially, the Mets paid Bay to go away, which is what I’ll say while I’m eating hay on this fine day.
After being hit with injury after injury, including a post-concussion symptoms and oblique issues, the now former Met reminded people more of MAMBINO whipping boy Endy Chavez than Jason Bay. However, he’s only 34 years old, has a keen batting eye and knows that this will be his last major league contract if he doesn’t produce. For the risk that the offense-strapped Mariners took, which is extremely low, this could end up paying huge dividends. From a sheer risk/reward ratio, this was a fantastic signing for Seattle.
FICTION
Anaheim Angels get: SP Joe Blanton
Joe Blanton gets: 2 years, $15 million, laughter of Phillies and Dodgers fans everywhere
Let’s be straight here; Joe Blanton isn’t terrible. He’s just wildly, incredibly, steadfastly mediocre. He’s thrown at least 175 innings every year of his career but one, but has averaged 200 innings on the whole. Blanton won’t wow you in any fashion: he’s strikes out a solid but unspectacular 6 per 9 innings and generally limits his walks to 2 per 9 innings. As was pointed out to me my ardent Halos fan and my Silver Screen and Roll colleague Ben, Blanton’s advance metrics point to the fact that his ERA wasn’t nearly as bad as his Dodgers’ mark of 4.99–he simply was unlucky. However, when you look at his numbers the pas
… Read more...
KOBEshigawa December 8, 2012 Boston Red Sox, Dan Haren, James Loney, Jason Bay, Joe Blanton, KOBEshigawa, Mike Napoli, MLB, Shane Victorino, Tampa Bay Rays, Washington Nationals Permalink 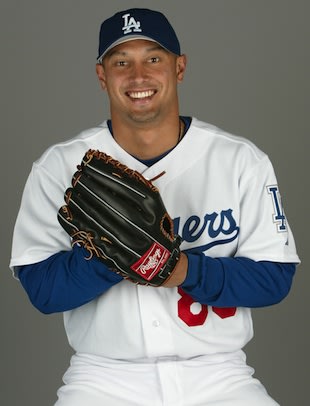 In another deal that’s going a long way to dispatch the plentiful Ned Colletti haters, the Dodgers GM acquired Shane Victorino before the trade deadline expired today for two young pitchers, Lindblom and Martin.
Victorino, 31, is a noted Dodgers-killer, holds a .795 OPS against the team in regular season play, and a memorable 12 RBIs in 10 games over two consecutive NLCS series in 2008 and 2009.  The latter series was the Flyin’ Hawaiian’s most memorable, in which he stroked a .368 batting average, .842 slugging and a homer at Chavez Ravine that’s only just landed right next to Matt Stairs’ from the year before. Although his gaunt island countenance still haunts Angelenos dreams everywhere, it now might be the key to the first Dodgers pennant in over twenty years.

The new Dodgers’ left fielder is a salve to the team in several ways. First and foremost, the team finally have their leadoff hitter. Several hitters have masqueraded as Don Mattingly’s batter atop the lineup, though to little success. Mark Ellis and Bobby Abreu have had the most success with .349 and over OBPs, but both men are up there in years and have decent, but not spectacular, footspeed. Obviously neither guy is a prototypical leadoff hitter, but Donnie’s had to turn to them in lieu of the more traditional Dee Gordon. The Dodgers’ young shortstop is currently on the DL, but with a .229 batting average an only a paltry .280 OBP, LA’s lineup wasn’t exactly setting up the middle of the order hitters, Matt Kemp, Andre Ethier and Hanley Ramirez, with many men to knock home.

Victorino solves a lot of those issues, but certainly not as well as the team would like. He’s having the worst season of his career by any metric, including a .261 batting average, .324 OBP and only a .724 OPS. His defense has definitely slipped from the fielding that earned him three consecutive Gold Gloves, though he’ll look like a young Griffey in comparison to the veterans who’ve played in his stead the past three months. A lot of reports say that he’s been playing rather disgruntled from a lack of a contract extension from the Phillies – he’ll be a free agent just months from now – as well as pressing a bit trying to justify in what will probably be his last big contract.

Quite honestly, Victorino is a great player, but he’s hardly the force that he’s been in year’s past. Dodgers fans should try to temper their expectations for a player that’s killed their team every single year. However, he’s already swatted nine homers and stolen 24 bags, which would be third and second on the Dodgers. He is a rare combination of power and speed that the Dodgers haven’t really had in a leadoff man since Kemp manned the position years ago for manager Joe Torre. Even in a down year, Shane is still an extremely effective top of the order hitter, whose base-running acumen should only sharpen with the reunion of him and former Phillies first base coach Davy Lopes.

Also, looking at the outfield, Victorino’s addition heightens in value when simply looking at who he’s replacing. The Dodgers left field has been a justifiably called a moderate disaster this year. Juan Rivera owns the high water mark for outfield batting at .261, while his platoon-mates Bobby Abreu and Tony Gwynn, Jr. are both replacement-level or below players. Jerry Hairston has played 17 ga… Read more...