The Los Angeles Kings are headed to the NHL Western Conference Finals for the second year in a row. This journey to the top of the West is a much different climb than the feverish ascension the team made last year en-route to winning the first Stanley Cup in franchise history.

I have spent many nights staying up until the wee hours watching this team attempt to repeat as champions–a special thanks NHL for the 7:30 p.m. start times in the playoffs (sidenote: This is clearly the most mismanaged league of all the major four sports. The NBA understands that TV ratings are what make the league more money so when the Lakers are playing in the playoffs, they bump the start time up to make it slightly more convenient for fans out east. The traffic is a bitch in LA, and natives whine but they are in Staples for the 6 p.m. start. Get with it NHL, for my sake). I must say this is a completely different experience for the LA faithful.

The Kings have to scrap through games and series as a whole. They are losing on the road and flawless at home. For a fan base that watched last year’s pure domination throughout the playoffs, this postseason may be a bit of a nail biter.

Fear not, Kings fans. This team is still in position to challenge to be one of the first repeat Stanley Cup Champions since the Red Wings did it in the late 90’s. Here are the 3 things I’ve seen from the Kings this playoffs that will help lead them to hoisting the cup once again:

1. Jonathan Quick is still the best in the NHL between the pipes 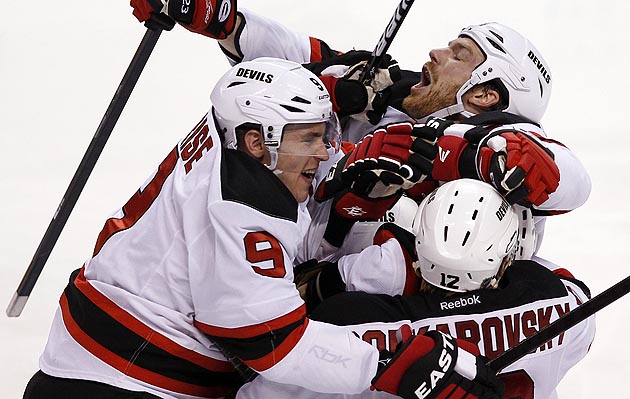 If you watch as much of the Stanley Cup Playoffs as I do, you have to be prepared for some late nights. After all, the postseason, with its potential for games that theoretically can never end is often full of overtime epics that stretch into the early morning hours, and this season’s rendition has been no exception. In fact, the first round of the 2012 Stanley Cup Playoffs had a record 16 overtime games, with the piece de resistence being between Chicago and Phoenix, a series that saw overtime in the first five games.

So, of course, it’s only fitting that the last game of the round, last night’s Game 7 thriller between New Jersey and Florida, which didn’t start until 8:30 p.m. despite being on the east coast so as not to coincide with the end of Game 7 between the New York Rangers and Ottawa Senators, needed more than 60 minutes to be decided. After all, Game 6, too needed more than 60 minutes to be figured out, resulting in Ilya Kovalchuk’s beautiful backhand feed after noticing he had lured in both defenders on a 2-on-2, which Travis Zajac took in front of the net and deposited between the legs of Scott Clemmensen to save New Jersey’s season.

But what was surprising about Game 7 between New Jersey and Florida was not that it needed more than 60 minutes to be decided, but that it needed more than 80. Double overtime isn’t something particularly unheard of, but overtimes have ended surprisingly early this postseason. Only three of the 16 overtime games this season reached a second extra period in the first round and the vast majority of games were done within about 10 minutes. This seems to run contrary to the typical postseason overtime trend of “try to end it quickly and if you can’t settle in and lock down the neutral zone and wait for a break,” not because games aren’t ending fast on the whole but because they aren’t ending immediately and still aren’t running on forever.

No need to worry, though. The Devils and Panthers solved that problem for everyone Thursday night by keeping the sportswriters, TV watchers and schedule-makers up deep into the evening in a holding pattern until somebody scored. As someone who is, shall we say, emotionally connected to one of these teams, it was an experience that was euphoric at its end but excrutiating for the rest of the duration. After all, playoff overtime is a precarious tight-rope walk where every slight shift in weight or brief mental mistake — and those are inevitable — could mean the end of a game or a season. The playoffs are stressful. Game 7 doubly so. Game 7 in overtime triply so. A Game 7 in double overtime? You get the idea. And despite nibbling on my fingers for most of the late evening, it was an immediate and explosive relief when Adam Henrique did this.

The game wouldn’t have gone that far, however, were it not for the absolutely stellar play of Martin Brodeur. As we’ve noted here earlier, Marty has struggled for stretches of this season and started to look his age — an age that will reach 40 next weekend — and while the Panthers did manage a furious third-period rally that tied the game with less than four minutes left, both of those goals were the result of an unbelievable amount of pressure and maybe a little too much contact with Brodeur put on by Florida. After all, people will forget that a third Florida goal early in the third period was waived off as a result of goalie interference, but they may not forget that the Panthers peppered Brodeur with an almost absurd 19 shots in the third … Read more...

pucklius April 27, 2012 Adam Henrique, Jonathan Quick, Martin Brodeur, Nashville Predators, New Jersey Devils, New York Rangers, NHL, Philadelphia Flyers, Pucklius Permalink
As we noted before, the Kings are who we thought they are. After destroying the dreams of Vancouver’s children, the boys from LA turn their focus to the St. Louis Blues.

If Vancouver was supposed to be the offensive Goliath of the playoffs, providing a serious threat to the Kings, the Blues are the defensive equivalent. Besides the Blues, there was no other team in hockey that played defense as well as the Kings. Both teams are made up of strong defenseman and Goalies who play with supernatural abilities. Many, including Kings Coach Daryl Sutter, are calling for this series to be one of the lowest-scoring series of all time.
While I think this certainly will be a series with tight play on the defensive-end, I believe goals will come at a greater clip than expected. The Kings found an offensive rhythm in the Canucks series that should carry over even against the large bodies of the Blues.
Many will point to the Kings 3-1 record against the Blues in the regular season as a sign that this will be a cakewalk. However, the wins earlier this season do not count for squat as the Blues were playing without a healthy Andy McDonald and Alexander Steen. These two players provide a huge offensive kick for the Blues and will change the dynamics/matchups for the series. My predictions will follow below but first the Mambino 3 keys to the Kings-Blues series.

1. Goaltending
Jonathan Quick is the best goalie in hockey. Sure the statistics may say otherwise but no keeper has done more with less than Quick. He played out of his mind this year under two different coaches and singlehandedly kept the playoffs hopes alive for the Kings. He is going to meet his match with the duo of keepers from the Blues.

St. Louis has played with the pair of Brian Elliott and Jaroslav Halak minding the nets. Elliott started the season as the backup for the Blues but wound up having a ridiculous, league leading, 1.56 goals against average. Elliott only played 38 games to Quick’s 69 (Quick managed to be second in the league with an equally ridiculous 1.95 GAA and a league leading 10 shutouts), but still proved his worth throughout the regular season. Halak is nursing a “lower-body injury” (see: sprained ankle) and will likely be ready to return by game 3 at the latest. This means the matchup will likely be Quick-Elliott in St. Louis.

The series outcome will undoubtedly be decided by how well Quick plays. If he continues to stop pucks like the 405 stops traffic nobody can beat the Kings. Read that sentence again. The Kings will stand on Quick’s shoulders as far as he can carry them.
2. Oh Captain, My Captain
Dustin Brown is my captain. He proved in the last series that he is the spark the Kings need to get rolling. With a stat line of 4 goals-1 assist-5 points in 5 games, Brown utterly dismantled the Canucks. He is going to be facing a more formidable Defensive group with the offensive Alex Pietrangelo paired alongside Carlo Colaiacovo.

The Blues, unlike the Kings, received a consistent offensive spark from their defense during the regular season. Though the Kings can look to Drew Doughty as their best offensive threat on defense, the Canucks showed how effectively teams can swarm the wily Doughty. It will again fall upon Brown to help keep the fore-check running strong and create gaps, keeping the pressure on the Blues goaltenders. It was certainly surprising to see the two shorthanded goals Brown scored last series but that type of heads up pressure from the Captain is going to be needed to keep the Kings heading deeper into the playoffs.
3. Staples Center Shittiness