To win a championship, an organization has to be two things: smart and lucky.

No team has ever stood in their locker room, soaked with champagne, screaming blithely into the air hugging an inanimate piece of metal without intelligent management at the helm and lady luck in their loins. It’s just never been done.

New Orleans Hornets get:
The document that legalizes the robbery by Rashard Lewis of 23.7 million dollars from any NBA franchise, Washington’s 2nd round pick (46th overall)

We’ve got LeBron James’ PR team in the final planning stages of his Finals MVP acceptance speech and the Anthony Davis Experience ready to begin next week. So it’s the perfect time to post about a trade that nobody cares about:

What this means for the Wizards:

Emeka Okafor is an above-average post defender and can protect the rim when fully healthy. The Zardos took an interesting buy-low approach on him, because Okafor’s season ended prematurely due to various injuries. Word around town is that New Orleans didn’t like his attitude and that he took his time getting back on the court. He is owed approximately $28 million over the next two years, but when you trade $23.7 million, you have to take some salary back. Okafor isn’t the ideal asset to acquire via trade, but at least he can give you some good minutes, which is something we can’t say for Rashard Lewis. However, Okafor (and Ariza) will be joining a crowded frontcourt in D.C. It will be interesting to see how the minutes are distributed among the bigs, with Nene, Kevin Seraphin, Trevor Booker, Chris Singleton, Jan Vesely, and Andray Blatche’s corpse all vying for minutes. 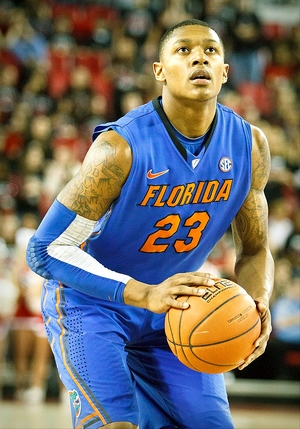 Trevor Ariza had a short-lived stay on the relevance chart when he started at small forward for YOUR Los Angeles Lakers during the 2009 Finals run. Miffed when the Show didn’t offer a long-term deal worth more than the mid-level exception, Ariza signed the same deal that was on the table with LA, but with the Houston Rockets. And so started his path to nothingness. He will always be a bit of a defensive stopper due to his length and athleticism, but the other areas of his game have not moved. Additionally, Ariza will make a little more than $7M next year, with a player option for 2013. A change of scenery might help, however, as the former UCLA Bruin could start right away. There may be a ton of alley-oops from John Wall in his future.

Washington holds the #3 pick in next week’s Draft, and this trade likely signals the arrival of Florida standout shooting guard Bradley Beal (pictured left) in the nation’s capital. Small forwards like Kentucky’s Michael Kidd-Gilchrist and North Carolina’s Harrison Barnes are still in the mix, but with the aforementioned crowded frontcourt, Beal is probably the best fit. I guess MKG can play the 2, but for the sanity of Wall and friend of the blog AO, let’s hope that Barnes has been crossed off the list.

What this means for the Hornets:

New Orleans will have the option of buying out Lewis for $13.7 million. Jesus.

The real value for new owner Tom Benson, is not in the value contained within this deal, but what the franchise can do because of this deal. If Lewis is bought out, coupled with the shedding of the contracts of Okafor and Ariza, the team will have the requisite salary cap space to re-sign Eric Gordon. Gordon would shoulder the scoring load, allowing Anthony Davis to be free from the burden of being a two-way player before he is fully ready.

I like this deal for both teams. The Wizards continue the reshaping of their roster, and can neutralize the added salary by amnesty-ing Blatche. The Hornets, already with Davis and the 10th overall selection, now have the ability to match any offer for Gordon.… Read more...