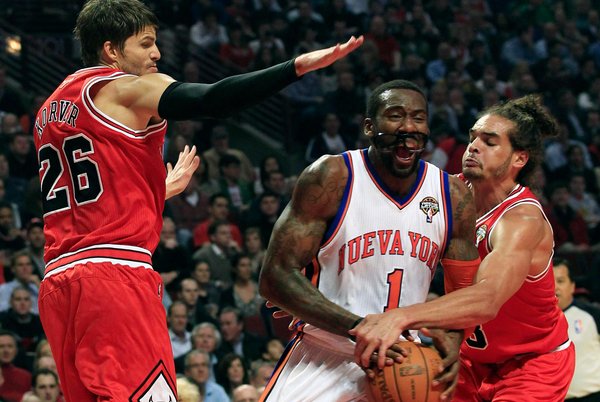 If I’m ever late for anything, there are plenty of things to which I can point the blame. Maybe it’s the extra 5 minutes in the shower. Maybe the traffic lights didn’t work in my favor or the subway decided it was convenient to run on the local tracks. But more likely, it’s probably that I didn’t care about being punctual.

Last night, YOUR New York Knickerbockers were outrebounded by the Chicago Bulls. That sentence isn’t that dramatic, until I tell you that the margin of glasswork was +18. That sentence has a touch of flavor, but I’ll take it a step further by telling you that the Bulls had 22 offensive boards compared to the Knicks’ 29 on the defensive end. So when Chicago was on offense, shooting an I-would-sign-up-for-this-everyday 43% from the field, they battled to a -7 deficit on the 57% of attempts that did not go through the net. On defense, a team has an easier time establishing the positioning required to grab more rebounds than the opposition. The vast majority of possessions will have most, if not all, defenders playing between their man and the basket, especially without the use of a zone defense.

Now let’s see: if the defender is between their man and the basket, the defender is closer to the hoop, and thus has the advantage of advancing the ancient basketball tradition of boxing out. In this scenario, it is embarrassing for a defense to yield a +7 advantage on the boards when they are protecting their own rim. So what happened?
There are plenty of reasons why the Knicks didn’t rebound the ball well last night:

1. They are not a good rebounding team

When the team signed Tyson Chandler, head coach Mike D’Antoni declared that the best frontcourt in the world played their home games at Madison Square Garden. Normally, when you think of an imposing front line, you think of big dudes who will take advantage of you whenever their size gives them such an opportunity.

Big dudes. The three of them average a little less than 24 rebounds per game, and those numbers don’t exactly paint a picture of doom and gloom. But any seasoned fan will tell you that it’s just not enough, even before we witnessed Chicago’s dominance last night.

The best rebounder of the trio is undoubtedly Carmelo Anthony. I thought Anthony had a decent game last night. KOBEsh even texted me to say that sometimes, the man puts on a display that will convince you that he’s one of the best we have in this league (Hubie Brown voice). Melo’s aggressiveness on the offensive end leads to several opportunities for offensive putbacks, and his second jump differentiates his game from most of today’s player. I’m not going to complain about his rebounding.

STAT and Tyson just don’t box out. Ever. If you watched the scrums last night, you’d think that Joakim Noah, Taj Gibson, and Carlos Boozer had cooties or something. It is beyond frustrating to witness. I can’t really explain Amar’e’s inability to get tough rebounds consistently, nor can I explain Tyson’s stubbornness to try and outjump his opponents without first trying to seal them off. The basics of boardwork are lost with these two guys, and while I love them for oth… Read more...

After Derrick Rose won his MVP for leading the Bulls to a league leading 62 wins and a number one overall seed in the playoffs, I realized that that award is only recognized for greatness reserved to Hall of Famers (or Hall of Famers in waiting). Any man that won the MVP had a Hall of Fame career in back or in front of him. For the 22 year-old Rose, this is obviously the latter.

His individual play isn’t going to be the story here. Rose will be great, and with youth and a clean medical chart on his side, I will expect the same play from him as last year (and he better – the dude is the CRUX of my fantasy team, LukesRetirementParty). He was undoubtedly the guy who most made THE LEAP last season, and thus, I don’t know how much better he can truly get. The real story is going to be if his supporting cast is good enough to beat the Heat and Celtics to get to the NBA Finals.

How will this play out?

The rest of the Bulls roster is so strong, it’s hard to believe that this team came up short during the free agent bonanza of 2010. Carlos Boozer, who was never the same player after his wrist injury last year, cannot be as bad as he was in the playoffs (Bulls management hopes, anyway). The Bulls biggest and most glaring weakness, was the rotation of Kyle Korver and Keith Bogans at shooting guard. With former All-Star and NBA champion Rip Hamilton now in the fold, it is like the Bulls replaced Mr. Bean with James Bond. Though not the long distance threat they truly needed (Ray Allen), the Bulls now have a guy that can come off screens and hit shots reliably. Unlike human statue Bogans or stand-still shooter Ashton Korver, Hamilton can move very effectively off-ball and is still considered an apt defender.

This Bulls team is built remarkably like the Dallas Mavericks of last June. In Rose, they have a transcendent individual, much like Dirk. But the superstars stop there. The rest of the roster is filled out with specialists and role players, guys like Luol Deng, Carlos Boozer, Joakim Noah, Kyle Korver, Taj Gisbon and CJ Watson. The Mavericks made their way to a title with a past his prime Jason Kidd, Jason Terry, Tyson Chandler, JJ Barea and Shawn Marion playing prominent roles, each to perfection.

If the Bulls have any hope of replicating Dallas’ run in June, they must have every single one of their role players at the top of their capabilities. That means Boozer fighting for hard rebounds and making fadeaway jumpers at the elbow; Rip Hamilton coming off of a hard Joakim Noah screen and tearing to the cup; Kyle Korver hitting corner threes with no hesitation; Taj Gibson coming off the bench and providing no indication that Carlos Boozer has left the game; Omer Asik not falling over his own feet; Luol Deng adding to every facet of the game, as Shawn Marion 2.0.

Everything went perfectly for the Mavericks last year, and they were rewarded with a championship. The Bulls, likewise have no margin for error. Ironically, the price that Chicago has to pay for not extending a large contract to Lebron or Wade is demanding complete perfection from 11 guys on the roster. It’s extremely rare that you have a title team led by one star, whose abilities are augmented not by a peer of the same talent, but rather by a cadre of complimentary players. The Bulls have that team. Playing the sheer odds of all those different factors aligning, I’m not sure that Chicago will have enough at the proper time to beat the Heat.

How will this affect the season?

There is one part of basketball (sports, really), that seems to outreach any limitation a team may have in terms of its collecti… Read more...