Anybody who had watched the first two Atlanta-Boston matchups this year (Boston rested their starters for the third game) knew this one was going to an ugly matchup. This game certainly “lived up” to its expectations as the Hawks beat the Celtics 83-74 in a game where each team scored 19 points or less in three quarters. Below are the game’s biggest stories:


RONDO GETS EJECTED: With about three minutes left in the game, Kevin Garnett nailed a jumper and I turned to my friend to said, “We [the Celtics] may not win this game, but there is no way Atlanta is beating us this series.” A little more than two minutes later after the Celts had cut the lead to four points, Rajon Rondo broke one of Doc Rivers’ cardinal rules – getting a technical foul in the fourth quarter. Things went from bad to worse when Rondo continued arguing and eventually chest-bumped referee Mark Davis.

There’s no doubt that Rondo will be suspended at least one game for this unforgivable transgression. Rondo has had several maturity issues in his six-year career, but this was probably his biggest mistake. As I told my friend, Atlanta’s not beating Boston in a series if they both field their game one rosters for the whole series. Boston played terrible tonight and they were still down only four points with a minute left in the game. Minus Rondo, the advantage swings over to the Hawks however.

Rondo versus Jeff Teague is the biggest mismatch on the court, as proved tonight, and is the key to the Celtics victory. As a matter of fact, if the Celtics had leaned on Rondo a little more with Pierce and Garnett struggling, I think they may have pulled off the win tonight. Rondo was simply fantastic (20 points on 10-18 shooting, 4 rebounds, 11 assists, 4 steals and only 1 turnover) until his late ejection. It’ll be tough for the Celtics to beat the Hawks in game two without him, even if Ray Allen is healthy. If he’s suspended for two or more games, the Celtics chances of advancing will be pretty slim. It’s really tough to understate how potentially devastating Rondo’s boneheaded move was. HAWKS’ ENERGY: The most overused excuse for getting outplayed in sports is “they played harder than we did tonight.” For once, that cliché is actually applicable, as the Hawks opened up a 19-point lead on the Celtics just past the midway point of the second quarter. Boston matched the Hawks’ intensity from there on out, but by that time they had dug themselves too big of a hole to climb out of. Besides the occasional “tired legs” game, the Celtics have played with a lot of energy the second half of the season. That’s why it was very surprising to see the Hawks completely out hustle the Celtics to start the game, which started with Atlanta’s first possession when Josh Smith found Joe Johnson behind the defense on a long pass despite the fact that Boston had two defenders ahead of Johnson when Smith got the defensive rebound. It also makes you wonder if Doc Rivers was wise to rest his starters against the Hawks during the last week of the regular season, essentially gave up any chance of home court advantage. I doubt the Celtics would have started so lethargically at home.

CELTICS’ COLD SHOOTING: The Celtics, who shot 46% from the field and 37% from 3-PT range during the regular season, shot 39% from the field and went 0-11 from 3-PT range. A lot of the Celtics’ poor shooting was the result of Atlanta’s tough defense. Outside of a couple games against Chicago, I can’t remember the last time the Celtics had to shot so many contested jumpers. Props to Atlanta aside, the Celtics missed more open and contested shots than they usually do, particularly in the first half, and it proved too much to overcome.

HAWKS NEED TO SCORE IN THE PAINT: Besides playing with more energy, the other reason the Hawks started off so well is that they were hitting an uncharacteristically high number of jump shots early (I’m looking at you Josh Smith). The Hawks are team that thrives on drives to the hoop and if they don’t score more than 28 points in the paint in future games, they’ll have a tough time scoring. This was proven over the last 30 minutes of the game when the Hawks started converting jumps shots at their normal rate and consequently scored only 43 points. The Hawks offense could also benefit from more easy buckets off of turnovers. The turnover-prone Celtics committed only six turnovers in game one leading to only four points for the Hawks. 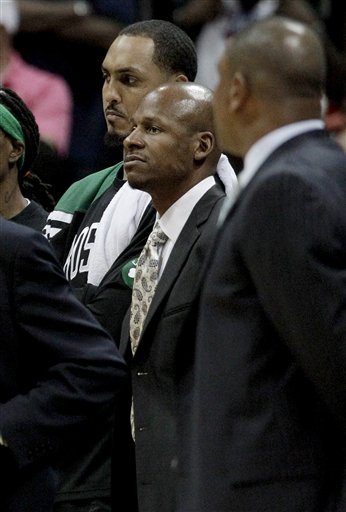 RAY ALLEN: The Celtics really missed Ray Allen tonight. With Pierce struggling, it would have been nice to have another shooter on the floor. The Celtics particularly could have used Allen in the first half as he always seems to nail a couple of big shots when the Celtics are struggling offensively, inevitably igniting a run that gets them back in the game. With Rondo assuredly out for game two, the Celtics need Allen to play if they have any intentions of avoiding a two-game hole.

So what’s next? It really depends on how many games Rondo is suspended for. If it’s one game, the Celtics may have to climb out of an 0-2 hole but that should not be insurmountable for them given that they truly are the better team. What happens if the suspension is two or more games, a possibility given that Rondo was already suspended two games already for throwing a ball at a referee? If that’s the case, I think the Hawks become the favorite to win the series. Atlanta’s defense already forced Boston into a ton of contested shots in game one and that issue will only get worse for Boston if their best playmaker isn’t on the floor. While I do expect Boston to shoot better going forward, they are going to have a tough time generating points if Rondo is not playing. That’s why it’s tough to overstate how selfish and immature Rondo’s actions were. Whether THE GREAT MAMBINO has a Celtics-Bulls preview article or a eulogy on the Celtic’s Big Three’s could be the result of Rondo bumping Mark Davis.