So, once every year — let’s call it, “spring time” — people remember that not only is hockey going on, but it’s playoff time. Now every sport’s playoff time is better than its regular season (take note, BCS) due to the increased stakes and the ratcheted-up intensity that results from it. Out of all of the major sports postseasons we see in North America, the Stanley Cup Playoffs stand out above them all as the best.

Don’t buy it? Let me count the ways.

Both the NHL and NBA have postseasons that last four full rounds of best-of-seven series that whittle 16 teams down to one, and there is certainly an argument to be made that the NBA is a physically grueling experience. Just ask a 6’7″ man how it feels to pound his knees by jumping for 48 minutes every night on a hardwood floor for two straight months. But all that said, the sheer exhaustion and physical nature of the game of hockey truly creates a situation with speed, strength and durability, which allow the cream to rise to the top over those two months. It is a brutally exhausting experience to get through four rounds of postseason hockey. And that’s probably why seeing the smiles — and frowns — on the faces of the teams in the Finals is that much more remarkable once its over. Oh, and these guys are all making these world-class moves on quarter-inch thick pieces of metal. Food for thought. 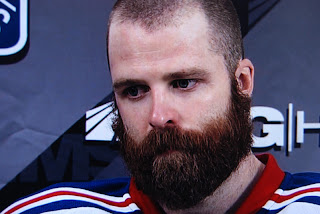 Is there any postseason superstition cooler than the refusal to shave until you’ve been eliminated or won it all? Not only does it provide some of the best beard and hair combos ever, but in the game of hockey it’s nearly impossible to see a player looking whiskery and not know it’s playoff time. It can accentuate the experience of the greats and sometimes, it just looks so damn awesome.

There is almost no postseason that brings overtime to such a fever pitch of excitement quite like the NHL’s. The difficulty of scoring in the NHL, as well as its sometimes precarious nature, combine with sudden death rules to make marathon events in that can sometimes reach a level of greatness. Sometimes, you never want them to end, and sometimes it feels like they never will end. Games reaching double overtime are so common place in the postseason that it almost doesn’t warrant a mention, but every year has a game or two with four or five overtimes that bring an epic importance. And what’s even greater, the cathartic explosion when a team finally ends one of them is a moment unlike any other in sports.

I mean, come on. What sport can boast a trophy like this? There is no other prize in professional sports that can come close to the beauty, grandeur and the symbolism embodied by the Stanley Cup. Does anyone remember how uncomfortable Raymond Berry looked when he awarded the Lombardi Trophy to the New York Giants after they won the Super Bowl this February? Well, you should since it was hilarious, but you probably don’t and that’s because no matter how hard the NFL, NBA or Major League Baseball try, there is simply nothing on this level.

So there you have it. These are four solid reasons why this is the greatest postseason in professional sports and if I were you, I’d be trying to watch as much of it as humanly possible. And in case you were worried, you’ll get to watch as much as you want this time around because for the first time in NHL history, every single playoff game will be broadcast live on a national network in the U.S.

That’s right, you don’t have an excuse anymore. So with all that in mind, here’s is a mild primer for each series with an idea of what to watch and what might intrigue you in each conference.

There’s a whole lot of hooey going around about the 1994 Rangers, New York’s last Cup winner, being similar to this season’s version. I don’t buy it personally, but that doesn’t mean they won’t do well. Ottawa has some young fire power with Jason Spezza and Erik Karlsson to go with the veteran leadership of Daniel Alfredsson, but does anyone with a brain really think New York’s hard checking style won’t lay that to waste? If I were a Rangers fan, there’s only one thing that would worry me.

There was bad news out of Beantown today when it was announced that a concussion will keep Nathan Horton out for the duration of the playoffs, but there is also bad news coming out of Washington, which is, it’s the playoffs again. The Capitals aren’t particularly good at that. In fact, most of this season it wasn’t particularly clear that the Capitals would make it to the postseason at all and they’re more than just a little inconsistent. Boston on the other hand, isn’t half bad, what with them winning the Stanley Cup and all last year.

The Panthers have waited 12 years to return to the postseason and after winning their first-ever division championship this year they are poised to…. well, probably exit after six games or so. The Devils play a grinding style of hockey that is unlikely to mix well with Florida’s one line that can score consistently. Additionally, New Jersey actually scored eight more points this season than Florida, which only gets such a high seed by virtue of winning a mediocre division.

If I lived in the state of Pennsylvania, I would be leaving it for the next 10-14 days. These are two teams that hate each other mercilessly, and they also happen to both be pretty damn good. There will be grinding, there will be physical confrontations and there might be a goal or two, also. I suspect the Penguins will be the team that wins this one, but we are seriously talking about a destructive combination of dislike. I’m not sure anyone on either team will be left in the series’ wake.

The Canucks looked like runaway favorites to win it all last season, then they tripped over themselves by losing four of the last five games of the Stanley Cup Final to Boston, including Game 7 at home. This year they looked to be suffering a Stanley Cup hangover for most of the season before putting it all together, and then, whoops, they somehow ended up with the best record in the League. Again. The Kings meanwhile, were expected to be a force coming into this season with the addition of Mike Richards, and that hasn’t exactly gone as planned. Neither has the expected boost from adding his former-Philadelphia teammate Jeff Carter at the trade deadline. L.A. is one of just two teams that failed to break 200 goals this season — and it failed by 21 of them. But they do have Jonathan Quick. And he just might be the best goalie in the game right now.

Before this season San Jose looked like it was ready for another run at that elusive Cup. After all, the Sharks had been to the last two Western Conference Finals and have been knocking on the door for quite some time. And yet there they were most of the season, bouncing around the 9th and 10th spots and jeopardizing what had been a promising season. Somehow the Sharks managed to make it, but drawing the Blues — a team no one expected to be all that good and now no one can seem to beat — is not an easy task. The Blues looked as mediocre as could be until coach Ken Hitchcock took over 13 games into the season, and while they don’t score much, they don’t really let anyone else score either, and a grinding defensive game is what the postseason is made for.

The Coyotes are a team that everyone wants to kill off on the second day of the season and yet somehow manages to stick around. This season they stuck around and then some, winning their last five games to seal the franchise’s first division crown since it entered the League as the Winnipeg Jets in 1979. That said, facing the Blackhawks is probably not the reward they had in mind. Chicago finished in fourth place in the Central division, but it was almost certainly the best division in hockey, a brutal gauntlet that regularly circulated the top four teams through the top four spots and didn’t even leave the women and children behind. The Blackhawks are also expected to get captain Jonathan Toews back for Game 1 Thursday night, and that’s just about the last thing anyone in Phoenix wants to hear.

Yes, the Red Wings are good; they are THE RED WINGS, after all. But no one seems to realize that the Predators are, well, the better team. In fact, the Predators seem to be left out of most discussions of likely Cup winners because they play in Nashville rather than Canada or an Original Six city, but anyone who knows hockey knows that the Predators are among the most dangerous, deep, well-coached, defensively sound teams there are in the field. The Stanley Cup Final could be played in Nashville this June and it wouldn’t be a surprise in the least. Of course, I suppose one could also say that about Detroit winning this series.

And there you have it. I hope you’re not confused or that the crash course hasn’t left your head swimming too much. If you need more clarification, tune into NBC Sports Network at 7:30 tonight, when Philadelphia and Pittsburgh drop the puck for the first game of the postseason.

You won’t regret that you did. It’s kind of the opposite of how I regret writing all of this because I now have carpal tunnel syndrome. But much like the players that will be on your TV tonight, if the Stanley Cup was at the other end of this post, I would type through it.