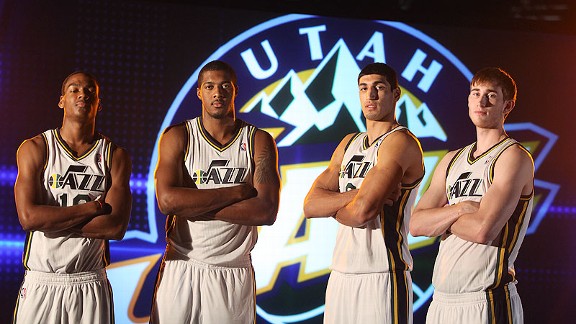 FACT OR FICTION: The Utah Jazz should be lauded for completely tanking 2013-2014.

FACT. In general, I think the presiding sentiment of tank or compete is overrated in the NBA. The 76ers are currently receiving accolades for sending out All-Star Jrue Holiday for another chance at Wiggins, but – if you look at the teams in the playoffs last year – only one contender (The Thunder) really tanked to get where they are today. Most of the other up and coming teams, like Houston, Memphis, and the Clippers either accumulated mid-level assets to swing trades, signed pivotal free agents, or  got lucky like the Bulls.

That said, the Jazz made the right call to mail in this season. They have quality, young players to develop across the board. Burke, Burks, Hayward, Kanter, and Favors are all going to get plenty of minutes this year, but in a situation without pressure to make the playoffs. The future in Utah starts now – and they have a promising core that will see more first round additions next summer. If all goes right, this team could be a real force in the West in a few seasons.

It hurt to let Al and Millsap walk, no doubt, but look at what it enabled them to do moving forward. First of all, they took on temporary salary in exchange for the NBA’s hottest commodity – first round draft picks.  By taking on one season of the horrible contracts of Andres Biedrins and Richard Jefferson, plus the useful one of Brandon Rush, they got four draft picks from Golden State (2014/2017 first rounders and 2016/2017 second rounders). That means two first rounders in this year’s loaded draft, plus plenty of cap space to sign their youngsters to extensions. If they so choose, they can even be players in free agency next summer.

Let’s be frank about what this means for 2013-2014 though – they are going to really suck. They will not be a good team, period. As impressive as last year’s 43 win, 9th place finish was, they’ve lost all the veteran moxie and low post scoring that got them there. They are really going to miss this summer’s departures, who they’ve “replaced” through the draft and uber cheap free agents. Their youth movement needs this opportunity to make mistakes and get heavy minutes, but that comes with the cost of missed rotations, hideous offensive possessions, and lots of headaches for fans that, you know, care about winning games.

Best case scenario: If Trey Burke is an instant contributor, the frontcourt manages to maintain its stellar per 36 minute numbers with extended play, and Hayward becomes a breakout star, this team still misses the playoffs in the loaded Western Conference. A repeat of last year’s 43 win season would be a huge moral victory – leaving a roster confident that they were about to become a perennial playoff fixture in the West.

Absolute apocalypse: The youngsters err on the side of mistakes, Derick Favors and Kanter aren’t ready for primetime offensive loads, and the injury bug hits the Jazz. Although 2013-2014 doesn’t really matter, they are among the worst teams in the league. By February, they are already wistfully looking forward to the NBA Draft, hoping the cavalry could come just a little bit sooner.

Expected outcome: 5th in the Northwest, 15th in the Western Conference