Charles Barkley has boldly proclaimed that these two teams left are the best two teams in the NBA. It’s hard to disagree.

The San Antonio Spurs and the Oklahoma City Thunder will begin the Western Conference Finals on Sunday, with a trip to the NBA Finals on the line. The two teams have gone 16-1 combined so far in the playoffs, with the Spurs on a 18 game winning streak and the Thunder only losing one postseason contest to a squeaker last Friday with the Lakers. No other teams are playing as well as these two squads right now, so the consesus should be, like Chuck says, that whoever wins this matchup is the presumptive NBA champion. Maybe.

We’re of two minds on this at MAMBINO HQ, but we’ve got not only our consensus decision here, but also spicy little alternative for you out there. Check it!

The CDP: OKC is the model for rebuilding at the moment, but we should take a long look at the Spurs as well. While it’s hard to call it classical rebuilding when you retain Ginobili, Parker, and Duncan, there’s no doubt the Spurs have reinvented themselves over the last few seasons. After a title in 2007, they made it to the Conference Finals in 2008, but were manhandled by the Lakers. The Spurs had a top 3 defense, but a middling 15th rankeddefense. They filled out the roster with Michael Finley, Bruce Bowen, Ime Udoka, Oberto, Matt Bonner, Brent Barry, Kurt Thomas, and Jacque Vaughn. 2/3 next seasons, the Spurs lost in the first round and it was clear they needed a fresh infusion of talent to remain competitive.
Fast forward to 2012 and Matt Bonner is the only role player holdover. The Spurs have added talent like DeJuan Blair, Kawhi Leonard, and Tiago Splitter through the draft while picking up Boris Diaw, Stephen Jackson, Patrick Mills, and Danny Green through shrewd pickups and trades. The Spurs arenow the 10th best defense, but the top-ranked offense. They haven’t lost yet in the playoffs or at home since April 11. Can you imagine the coverage that this would receive if it were the Heat? The media would even throw Tebow aside for that scoop.
The Spurs may not have had to beat the Mavericks/Lakers like OKC, but I’m not worried about a team with Popovich and Duncan being ready. In many ways, OKC is a mirror image of the Spurs, a top-heavy small market team built on three superstars and the right supporting cast. OKC has the 2nd ranked defense and #11 offense,both right behind the Spurs. They are an extremely talented young group that is growing quickly and capable of overwhelming teams with their athleticism. I just think that the Spurs still have their number this year and are playing too well. Here’s why I’ll take the Spurs in 7: 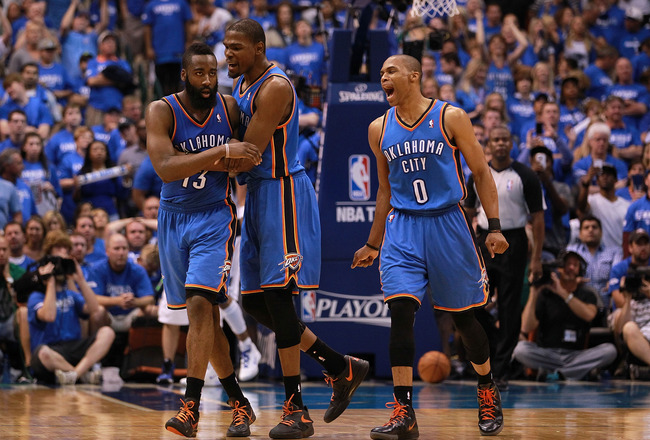 Why the Thunder could take it in 6 games
KOBEsh: Was my pathetic Lakers apologist love letter to OKC not enough the other day? Being modest and complimentary feels like a detriment to my general character flaw of selfish homerism.
For all the reasons The CDP has argued, the Spurs might be playing the best basketball in the league right now. But can’t you say the same for the Thunder? Their ball movement is crisp, help defense stifling and all their role players are clicking at the same time. Individually, besides LeBron, there might not be an playing quite as well as Kevin Durant this postseason. As well as the Spurs are playing, I’ve been even more impressed with the Thunder for a number of reasons:

I can’t say this enough – both teams are playing fantastic right now. This series is truly a crapshoot, so I think that anyone’s particular prediction can’t be wrong. However, all things even, and I think they are, I’ll take the individual brilliance of the Thunder’s three young guns over what Tony Parker and two aging stars can bring to the table.