(Yesterday, The Raw Librarian and I covered several different prospective main events that could headline Wrestlemania XXIX, emanating live from MetLife Stadium in New Jersey on April 7th, 2013. We’re both so fired up that new pants are entirely in order. Check out Part 1 right here)

Most Likely Match and Best Match For Business

KOBEsh: We covered this largely in our John Cena section yesterday, but it’s clear that Rock-Cena II is going to be in the cards. The only factor that’s somewhat murky is what the stipulations are going to be for the match itself. Will it be for the title? Will it be fought under the pretenses of No Holds Barred? Will there be a Special Guest Referee? Does any of that matter?


IT DOESN’T MATTER WHAT THE CIRCUMSTANCES ARE. This match is going to blow the figurative roof off of MetLife Stadium. 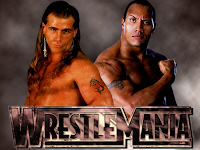 These two had real life animosity going back to the Kliq days. HBK was aware of how over the Rock was getting and knew it meant bad things for his real life best friend HHH. He gave a shoot promo or two where he talked about “the Rock always trying to steal the spotlight from Hunter.” IF this match were to happen, it’d have a solid backstory beyond two of the greatest ever going toe-to-toe.

This match will never happen. Neither men are interested (especially the retired HBK) and the WWE wouldn’t want to blow all this money getting the Rock to wrestle again knowing that there are bigger bouts out there (i.e. Cena-Rock).

TRL: Ryback vs. The Shield

Whether it’s in tag team format or Ryback vs Dean Ambrose with Roman Reigns as enforcer, everything points to Ryback being involved with the Shield at ‘Mania. I don’t see any other obvious matches right now. I like Ryback, but I like the Shield a heck of a lot more. I need to praise WWE creative for some rare long-term booking and development here. They have yet to screw up any of these young performers. Look for these men to be involved in a match together in some capacity.

Until I went and saw for myself in person, I couldn’t discern on television whether or not Ryback’s ascent to the main event picture was more manufactured than it was actual fan sentiment. It seemed to me that the volume was turned up all around the former Ryan Reeves in nearly every segment he was featured in. His music blared so loud that it obscured how much fans actually were applauding for him. When he threw smaller men around the ring, they landed with such force that the actual buckling of the squared circle elicited a reaction from the crowd, but more in the vein of awe than affection. As he chanted “Feed Me More”, the audience of course chanted along with him, but as CM Punk echoed this past Monday on Raw, the WWE fan base are like trained dogs–they’ll chant just about anything as long as it’s delivered to them with the same measured vocal pacing. Did people actually like Ryback? Or was the audio emanating from and around him manufacturing his hype as much as the WWE could muster?

After watching the man fight The Shield in a TLC match in Brooklyn, I can attest that Ryback is more than hype. He’s the real deal Holyfield. The crowd eats him up, as if “Feed Me More” becomes more than just an infectious catchphrase. He’s physically imposing, brutal and pure charisma. He made a believer out of this jaded fan.

That all being said, Ryback’s strengths are best shown not as actual fe… Read more...