Almost two years ago to the day, I woke up on an air-mattress with my phone lighting up next to my head. Texts and e-mails were pouring in, unusual at 7am Eastern Time in the days following Thanksgiving. For anyone that’s received a barrage of telecommunications at that point of the morning, there is, quite frequently, a conversation of terrifying consequence on the other line.

I couldn’t have been more wrong. Friends and hoopheads from all over had let me know that the NBA Lockout was over. It was Christmas in November.

In the days that followed, my dormant Lakers fandom had sparked and sputtered like a dusty old car coming back to life. My mind raced with the thoughts of how the team–just 18 months removed from a Game 7 NBA Finals win over the Boston Celtics–would try and rebound from a tepid title defense and second round sweep at the hands of the eventual champion Dallas Mavericks. Kobe Bryant was an elite player, Pau Gasol one of the best bigs in the game and Andrew Bynum primed for a breakout season. There was no reason why the Lakers couldn’t win a title with some minor tweaks.

Minor tweaking wasn’t what GM Mitch Kupchak and the Buss family had in mind.

On Thursday, December 8th, the Los Angeles Lakers and New Orleans Hornets consummated a trade that no one saw coming. The Lakers had dismantled their three-time NBA Finalists, dealing the front court that had been on the floor when championship confetti had fallen from the rafters not once, but twice. In the agreed upon three-team deal, LA would send Gasol to the Houston Rockets and Lamar Odom, along with Kevin Martin, Goran Dragic, Luis Scola and a first-round pick would be sent to New Orleans. In return, NOLA would send Chris Paul to the Lakers. Additionally, the Show would end up saving nearly $40 million dollars in combined salary and luxury taxes for the upcoming season. It was an absolute heist, but one that was agreed upon by three general managers and two ownership groups.

(Read on at Silver Screen & Roll) 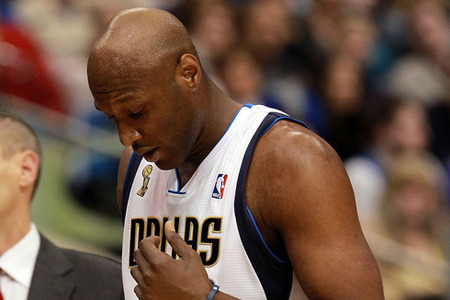 Dallas Mavericks get: draft rights to Tadija Dragicevic, cash from Houston, and a relief from the pain and suffering brought by The Kardashian Curse

Odom’s 2.4 million dollar salary would have become a hefty 8.2 by tomorrow if Dallas couldn’t pull off a miracle. Enter the Utah Jazz and their Mormon kindness, willing to take disgruntled backup combo guard Mo Williams from the Clippers, to facilitate a four-way deal.

By unleashing the much-maligned but uber-talented Odom, Dallas puts the finishing touches on what has to go down as one of the most abysmal title defenses in recent history. Mark Cuban, in only one calendar year, did the following:

Now, of the four, the Odom deal was universally described as brilliant. Odom was fresh off becoming an unsuspecting victim of David Stern’s “basketball reasons” veto, and couldn’t muster the testicles to play for a franchise that didn’t want him. (Of course, “didn’t want him” = “we were on the verge of getting Chris bleeping Paul, you idiot.”) We laughed at Los Angeles, as Dallas seemed to luckily pounce on Showtime’s misfortune. 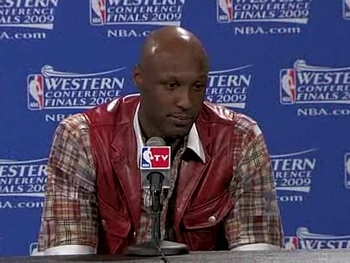 But Odom endured the worst year of his personal and professional life. While basketball Twitter was focused on the rumblings of the lockout, Odom spent his summer in pain over two deaths. One was the murder of his cousin, the other was a teenage pedestrian killed when a car, in which Odom was a passenger, collided with a motorcycle. As a result, the former University of Rhode Island standout arrived in Big D looking as doughy as ever, his conditioning probably suffering from having to eat Khloe’s leftovers whenever the behemoth felt pressured by her breathtakingly beautiful sisters (meaning, everyday). Okay, his conditioning actually suffered from not playing any basketball at all during the offseason, as opposed to the previous year, where he made a valuable contribution to the Kevin Durant-led Team USA that won the World Championships in Turkey. 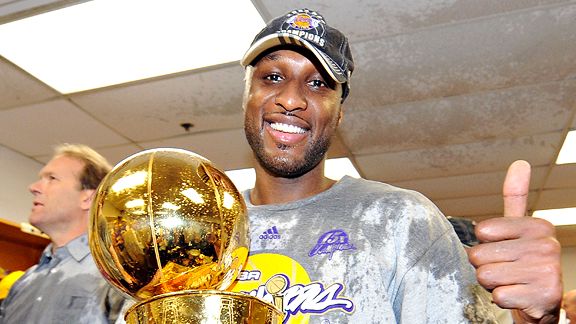 But everything was supposed to be water on the bridge once the first jumpball was thrown up. After all, this was the reigning Sixth Man of the Year (although I guess the award has lost some luster in the past few weeks. You know who you are.). This was the guy who was versatile enough to play all three frontcourt positions, handle the ball, create, pass, and shoot. This was the guy who was traded to a team that was coming off a Larry O’Brien trophy, dismantling the team that made the trade, via sweep.
Not so fast, my friends. Odom sauntered through the 2011-2012 NBA season, producing career per game lows in minutes played (20.5), points (6.6), rebounds (4.1), and shot a frightening 35% from the floor. He spent some time away from the team to figure his ish out, and even had a short stint in the D-League (although he did not play an actual game there).
__________
Even yours truly was guilty of poking fun at Lamar Odom. But with today’s news, Odom has an opportunity to reclaim his place as a contributing member o
… Read more...
BockerKnocker June 30, 2012 BockerKnocker, Dallas Mavericks, Houston Rockets, Instant Trade Analysis, Lamar Odom, Los Angeles Clippers, Mo Williams, Utah Jazz Permalink 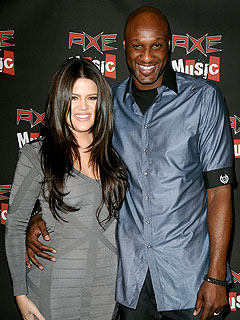 Word today was that Lamar Odom and his wife were cancelling their show,“Khloe & Lamar,” on E! so that he could focus on resurrect his basketball career next season. Their publicist rebutted the cancellation later, but I really hope she’s just trying to get them to reconsider. I think Odom deserves some time out of the spotlight to gather his thoughts and reconstruct his life, not just his playing career. He’s always been a favorite of mine, despite being an erratic on-court product. He’s a brilliant basketball player as well as a genuinely good person with an infectious smile. But the amount of speculation and media coverage directed at Lamar, both through his reality show and disastrous NBA season, would be enough to break most men, much less men that had been through as much personal tragedy and professional turmoil as Lamar.

A Brief History of Lamar Odom
Lamar Odom is and always will fit the archetype of the underachieving NBA megatalent. Although his two championships in Lakerland will help absolve him partially for his on the court performance, he never managed to win with Kobe until Pau came into town to take over the role of second option. Lamar was never meant to be the Pippen on a championship team, despite what his prodigious talent and Magic-like 6’9” frame might have suggested about his potential. The simple fact is that the Lakers were a much better team when he was a 6th man who could corral the bench as its playmaker or fill in for Pau/Andrew if they were hurt or in foul trouble rather than its workhorse. That way he could tantalize with his talent from time to time and take over the occasional game.  Regardless of what happened on the court, he was the emotional core of the team, the guy who set the locker room at ease, and a true friend to his teammates.

My brother and I agree on Lamar Odom. There’s no one we enjoy watching more than a round of inspired play from LO, it’s a thing of aesthetic beauty. While discussing the maddening inconsistency of LO, he wrote in an email:

With a near impossible skill set, radiating charisma, and hustle that every coach begs for, Odom can manage to be the most engaging player on a court also including Kobe Bean Bryant, no small feat. But even in the best of times, Lamar “Coast-to-Coast” Odom had faltering moments, possessions that escape his outstretched arms and assignments blown by careless mistakes. There were games where I questioned if his spirit had been taken by aliens in an intergalactic duel straight out of Space Jam, only to have him reawaken at the end of the game with a monster putback. A study in contrast, Odom, within the course of a single game, could go from the most valuable player on the roster to the lowest on the totem pole. I never minded his errors, never judged his lapses of reason. Give him a quarter, or a game to wind down, sort it all out, and he’d be right back to top form.

In many ways, it’s incredible how much Lamar Odom has accomplished with the amount of tragedy he’s had to endure. Growing up in Queens, he had an incredibly rough childhood. His mother died of cancer when he was 12 and his father was a heroin junkie, leaving his grandmother Mildred to raise him. She passed away when he was only 20. Odom’s 6 ½ month old son Jayden died of sudden infant death syndrome in 2006. This off-season, he was a passenger in a car that killed a 15 year old boy and lost a close cousin as well. He was so shaken up by these recent proceedings that he reportedly considered retirement in the off-season bef
… Read more...
The CDP May 1, 2012 Dallas Mavericks, Lamar Odom, Los Angeles Lakers, NBA, The CDP Permalink