Whoa! The 2012 MLB season snuck up on us like a new Rihanna LP – unexpected and yet, we’re incredibly happy it’s here. Like, way too happy.

As is tradition with the birth of every new season, we’re greeting it on MAMBINO like you would any old friend; with incredibly invasive questions, exploring the greatest weaknesses, storylines and potential surprises in the next year.

We’ve rounded up the MAMBINO stable better than Billy Crystal and Daniel Stern could, and written down some questions that HAD to be answered before the 2012 MLB season kicks off in earnest next week (yes, I realize that we’re ignoring “Opening Day” which is an opening series in Japan with the A’s and Mariners that started last Wednesday. No disrespect to my Japanese forefathers, but we’re pretending that baseball isn’t going on yet because those two teams are glorified Triple A squads. It’s not about Japan. For real. It was 80 years ago, everyone’s gotten over it).

Is the Phillies’ window closing?

Pucklius: So here’s a fun fact for you. The Cincinnati Reds, Colorado Rockies and some baseball-like organization known as the “New York Mets” all finished with losing records last year. Here’s another fun fact for you. All of these teams scored more runs last season than the Philadelphia Phillies.

As far as I can tell, prognosticators tabbing the Phillies for a sixth consecutive NL East title are doing so out of sheer habit and laziness while ignoring the fact that the Braves have been rising for years and the Marlins, who won’t be as good as Jeffrey Loria thinks but will still be good, have a solid crop of young talent (Josh Johnson, GianCarlo Stanton, Logan Morrison) that has been overshadowed by the big name free agent signings (Jose Reyes, Mark Beurhle) as well as some guy named Hanley Ramirez, all of which has closed the gap considerably. The Phillies meanwhile have an almost ancient short stop in Jimmy Rollins, an aging Chase Utley, who hit a paltry .259 last season and won’t be healthy for the start of this one, and a grand total of one player, Hunter Pence, who had a plus-.300 batting average (.314) or a plus-.500 slugging percentage (.502). Meanwhile, Ryan Howard, who according to recent sabermetric-centric story in ESPN Magazine doesn’t help a team that much more than he hurts one anyway, won’t even play until as late as June following a torn Achilles tendon on the final out of Philadelphia’s 2011 postseason. Essentially, this means that if you somehow manage to get lucky and score 4 or 5 runs against the Phillies remarkable starting rotation you probably have a pretty decent chance of beating them — and in the pitchers nightmare that is Citizens Bank Park, scoring 4 or 5 runs isn’t something a competent Major League offense should find all that hard to do. Just imagine what that offense will put up when it finds itself in places where batting average and runs created go to die like Citi Field or Petco Park.

I should note that Philadelphia did win 102 games last season — and outscored opponents by a league-best 184 runs — but those numbers are almost entirely a result of a stellar pitching rotation. Now, that rotation is stellar, and far be it from me to question the abilities of Roy Halladay, Cliff Lee and Cole Hamels, but Roy Oswalt is gone and Vance Worley, who struggled last September, and Joe Blanton are the likely men to jump into his position. They do not inspire the same kind of fear and the other numbers are alarming. For one, the Phillies’ rotation logged over 1,000 innings last season, and with this not exactly being a young pitching roster, that could wear on them even a year later. Add to that the fact that Cole Hamels allowed hitters just a .214 average against him and the fact that Philadelphia’s run differential was 101 runs better than the Milwaukee’s, which was the second-best mark, and you start to see a lot of numbers that look very difficult to sustain from season to season.

It’s entirely possible that as a Mets fan and holder of general disdain for all things Philadelphia that don’t have cheese sauce on them, I may just be grasping at straws in hopes that I don’t have to see the Phillies in the playoffs this fall. But I think the NL East is shaping up to be a gauntlet, and the almost complete lack of an offense and the age of the roster has me thinking the crash is coming soon — and there are plenty of talented teams waiting to knock the crown off that head on which it so uneasily lies.

Will the Houston Astros lose more than 115 games? 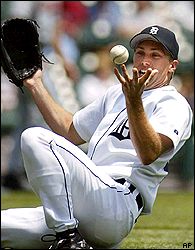 KOBEsh: …it’s possible. The 2003 Detroit Tigers were 43-119, which is the record for most losses in American League history. They had two above average hitters in a pre-breakout Carlos Pena and a pre-svelte Dmitri Young. The Tigers had almost twice as many strikeouts as RBI, a team batting average of .240 and got on base at a remarkable (in a bad way) .300 clip. And that’s even before we get to the pitching staff. No starter had an ERA under Nate Cornejo’s 4.67 mark and Mike Maroth became the first man to lose 20 games in over 20 years. Future star Jeremy Bonderman had to make 28 starts as a 20 year-old with a 5.67 ERA and a 1.54 WHIP out of necessity. Franklyn German had a 6.04 ERA and a 2.06 WHIP and somehow pitched 44 innings. What’s even more incredible is that German was tied for the team lead in saves…at five. Five saves! Jonathan Broxton had more than that last year and he ate a human being!

I bring this all up because if you look at the 2012 Houston Astros…are they better than the Eiffel Tower of human excrement known as the 2003 Detroit Tigers? OF JD Martinez and 3B Chris Johnson have shown some level of promise, but not enough to make me think they’re better than a young Ramon Santiago or Brandon Inge. Carlos Lee could provide a similar amount of sock…if he in turn hasn’t eaten Jonathan Broxton. Jed Lowrie played in 88 games last year and that was a career high. The rotation might not be much better either. Wandy Rodriguez has a spring ERA of 8.00. JA Happ and Bud Norris are young and have had their moments, but aren’t much more polished than Gary Knotts and Mike Maroth in 2003. The difference might be in the ‘pen, where the steady Brett Myers has oddly been shunted back into the closer’s role he had briefly in Philadelphia. However, Myers hasn’t closed since 2007 and his backups Brandon Lyon and Wilton Lopez have been spectacularly awful at times.

But most like 2003 in Detroit, these Astros don’t have a lot of help coming down the prospect pipeline. Many have made note of how awful the Houston farm system is, so any help that the ‘Stros will be getting will be mediocre talent, at best. All joking aside, I don’t think this Houston team will be quite as awful as the infamous 2003 Tigers. But looking at how terrible the starting lineup is, along with the Astros need to deal vets like Rodriguez, Myers and Lee for prospects, I see it getting close. 110 losses wouldn’t surprise me.

Who will be better? Yoenis Cespedes or Yu Darvish?

KOBEsh: We’re not afraid to say it here; MAMBINO drinks the Darvish Kool-Aid like we’re college freshman desperate and willing to down anything to get drunk. Anything except for Milwaukee’s best, though. Seriously, that stuff is made out of grass, CO2 and Drew Gooden’s pee. It’s just awful.

My case for Darvish is pretty well established here, but I’ll go over the cliff’s notes version of it: the hype for all Japanese imports are pretty much the same. Everyone is wary on how skill will translate back to a much more competitive American game, with bigger, stronger hitters and even more outward and vicious scrutiny from the media. Daisuke Matsuzaka is a prime example of this; much heralded from Japan, he came to the states and wasn’t nearly as good as advertised. Kei Igawa, Kazuhisa Ishii and Hideki Irabu had lesser expectations, and to some degree, even lesser results.

However, the common thread with those pitchers is that even in Japan, none of them showed the type of dominance that Darvish has. As I detailed a couple of months ago, in just over 1,000 innings, Yu pitched to a 1.72 ERA and a 0.89 WHIP – superiority that Hideo Nomo nor Daisuke could match. Along with his massive frame and fearlessness, I can’t expect that Darvish will be anything but spectacular.

Cespedes on the other hand, is a much more unknown quality. Coming out of Cuba, footage of Yoenis has pretty much been limited to a handful of World Baseball Classic games (in which he dominated with a 1.480 OPS!) and a really long workout video in which the quality resembles as if it  were cobbled together by Jim Abbot on a PSP. However, from what I’ve seen, the man has a massive amount of athleticism and big-time power. His swing resembles a strange cross between Sammy Sosa and Robinson Cano, and I mean that in all the best ways. Even so, he’ll have a hard time adjusting to the pitching-rich AL West, and especially hitting them out of Oakland Colliseum. I think he’ll have a solid year, but nothing like the dominance I see Darvish having.

How will Ryan Braun respond to a near suspension for being a dirty, disgusting, no-good cheater?

KOBEsh: I was very notably bummed out when I originally found out the Hebrew Hammer had been suspended handed a 50 game suspension back in November for allegedly violating the league’s substance policy. But by some complicated legal maneuvering and a few technicalities, Braun has become the first man to ever get a PED-related suspension overturned.

The problem here, as many have pointed out, is that Braun wasn’t exonerated of the charges, per se. The tests weren’t proved faulty, nor did Ryan’s legal team ever pursue that venue. Rather, circumstances around the tests themselves were attacked, and the arbitrator had no choice but to allow Braun to play in the first 50 games of the MLB season.

Though this is a “burning question”, there are so many moving parts to this story. Was Braun taking PEDs during the entirety of his 2011 NL MVP season? How much did that affect his career best numbers? Will any drop in his statistics be more of a product of outside pressure, or not using PEDs? Or both? Was he better off just accepting the suspension, serving his “time” and coming back without the same amount of vicious scrutiny?

I don’t think it’s any surprise that Braun is batting .220 this spring. The eyes of baseball are all upon him, just waiting to tear him down. If he plays anywhere near the low level he’s been at for the past 4 weeks, they won’t have to wait long. Braun has never had this type of pressure on him in his entire life, and it won’t get easier. Prince Fielder has left for the Tigers, replaced with a still potent but less punishing substitute.

He’s going to be booed in every single city he travels to this summer, and perhaps rightfully so. I expect Braun to have an incredibly sub-par year for him, but because of outside pressure over any other type of “internal” issues. Unfortunately, the Brewers only go so far as the Hammer will take them, so even with the new playoff format, I wouldn’t expect the Brewers to stick around and contend this year.

Check out Part 2 of our Burning Questions for the 2012 MLB Season later this week!